Two sides of the Story: Diversity

Both in and outside the US, companies and asset managers alike are assessing the possible impact of Biden’s presidency. Biden has stated that he intends to not only aim for a broad climate agenda, but also to increase diversity in both politics and the business sector. Even though the concrete policy changes have yet to be announced, it is not too early to anticipate the possibility that this will draw even more attention to diversity in terms of, among other things, ethnicity, race and gender.

The diversity debate goes beyond the question of whether it is “right” to stimulate diversity in the workplace. A study by Research Affiliates has shown that cognitively diverse groups have higher levels of collective intelligence, which results in more creativity, innovation and better leadership. The most recent proof includes a report by McKinsey that establishes that companies with more gender diversity have a 25 percent higher chance of above-average profitability than their traditional counterparts. According to McKinsey, companies that are in the top quartile in terms of racial and ethnic diversity even have 35 percent more chance of achieving better financial returns than their industry peers.

The financial sector therefore urges companies more than ever to increase their diversity and to be transparent about it.

Insight into the extent of diversity and having an inclusive culture is an increasingly important theme during conversations between investors and companies (engagement) as well as an upcoming factor in investment strategies. The UN’s sustainable development goals regarding gender equality (SDG 5) and reduced inequality (SDG 10) serve as additional incentives.

To this day, however, there is insufficient data by which we can determine the extent to which companies embrace diversity. In the Netherlands, for example, privacy legislation prohibits the registration of an employee’s ethnicity. This is why, according to employers, it is impossible to assess how many employees have a migration background and what their positions are within organisations. 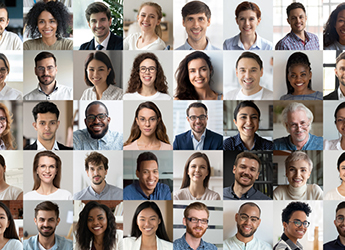 In other countries, such as the United States, registering an employee’s ethnic origin is allowed, but still only a fraction of US companies give full disclosure. Bloomberg research has shown that nearly three quarters of the companies included in the Russell 1000 (an index of the largest companies on the US stock markets) do not provide full transparency on their workforce’s ethnicity. Further, only 39 percent of companies report on the extent of gender diversity among their staff. Companies are cautious for fear of, among other things, public perception or reputational risks if their figures are “bad” or unflattering.

Due to the lack of data, our assessment as ACTIAM of the measure of diversity often does not extend beyond whether a company has written a diversity policy or the number of female board members. This means that diversity can only play a very limited role in an investment decision. We do try to gain an insight into the extent of diversity development by means of engagement conversations, but as long as companies do not start reporting more, the lack of data will continue to be a challenge.

Given that several studies have shown that diversity is in indicator of a company’s financial performance, I am curious to hear how much store you as an investor set by diversity. Do you see diversity as an investment opportunity

I would like to start by pointing out the irony of us, two white men, engaging in a discussion about diversity. But this does not detract from the fact that the importance of diversity is indeed growing in the financial sector. For instance, in December Nasdaq announced that if the SEC (the US stock market watchdog) gives its approval, new listing requirements will enter into force. This would mean that all companies listed on the US stock exchange would be obliged to disclose consistent, transparent diversity figures for their management boards.

These rules would also require most companies listed on Nasdaq to have at least two “diverse” managing directors, which would have to include a woman and one person who self-identifies as either an underrepresented minority or LGBTQ. If a company fails to meet these requirements, it will have to explain why. With two female managing directors, foreign companies and smaller reporting companies will have extra flexibility to meet this requirement.

The number of regulations is growing, as is the fact that institutional investors increasingly focus on diversity. This actually says enough about the fact that diversity should be weighed in the balance when analysing a company. But it remains to be said whether this also means there are investment opportunities. Katherine Klein, a professor at the prestigious Wharton University, says that several scientific meta-studies show that diversity does not undeniably improve a company’s financial performance (but does not harm it either).

Looking at share indices that were launched over the past years, with investments made only in companies that showed best performance in terms of diversity, does not support this image. Out of 7,000 companies, the Refinitiv Inclusion and Diversity Index identifies the top 100 listed companies with the most diverse and inclusive work environments (measured on the basis of 24 separate statistics divided over 4 salient pillars). Over the past ten years the difference between the index and MSCI World has been 33.45%; MSCI World had better results. On a regional level, you can also see that diversity indices (including gender diversity) suffer defeat compared to the broad market. One example is the SSGA Gender Diversity Index, which includes gender-diverse US companies.

That diversity index also showed poorer results over the past ten years than the broad US index (a difference of 38.76%). The European counterpart (the Refinitiv Europe Equal Opportunities Select Index), which includes the 30 companies with the best performance in terms of diversity and inclusion, has shown significantly poorer results than the broad European Index over the past ten years (with a difference of 58.8%!). What is striking about the World Index and the US indices is the differences between the top ten companies. In the broad indices, the top ten generally includes the customary FAANG shares, but in the diversity indices these shares are usually absent from the top ten. Given the immense increase in value of these companies and the heavy weighting in those indices, it is not a complete surprise that returns are running behind.

Looking at the historical evidence from both the meta-studies and the return backlog in the specific diversity indices, I find it hard, as a portfolio manager, to invest specifically in diversity as a source of return.

What is striking, though, is that there are parallels between diversity research and ESG. Over the past years, many meta-studies failed to reach a clear conclusion on the link between financial performance and sustainability.

Regulations are becoming more outspoken as well, Nasdaq being one of the examples, and more rules relating to diversity have been implemented in the UK and France.

I think the best way to integrate diversity is by focusing on the flops. By following up with engagement and exclusions, investors can limit risks of uniformity in boardrooms as well as the risks posed by laws and regulations.