“It starts with ambition.” Once the slogan of a major bank, it is now a fairly common catchphrase. But does it reflect reality? To what extent is the torrent of climate ambitions proclaimed by oil companies this spring really directed towards halting climate change? And to what extent are these companies’ claims that they are thus operating in line with the Paris Agreement justified from both a societal and a financial point of view?

In recent years, the climate change debate has increasingly been about carbon budgets, the maximum CO2 emissions allowed within the scenarios described to limit the increase in the global temperature to 1.5 to 2 degrees Celsius. Although there are many different scenarios, they generally require global CO2 emissions to reach ‘net-zero’ around the year 2050. But this target does not tell the entire story. The fact is that the process for achieving that emissions target is just as important.

Investors are taking various initiatives, such as Climate Action 100+, to urge companies to set emissions targets and those companies are increasingly taking heed of them. At the UN Climate Action Summit held in 2019, for example, 87 multinationals agreed to ensure that their activities do not contribute to global warming in excess of 1.5 degrees Celsius compared to pre-industrial levels. Although climate ambitions like these are not new, it was the first time that such a large-scale initiative referred not only to scope 1 and 2 emissions but also to all other indirect emissions resulting from commercial activities (scope 3).

Scope 3 includes emissions from all non-energy resources such as steel used to construct an oil rig or cement used for buildings, as well as from all applications requiring the use of an organisation’s products such as the fuel sold by an oil company. It encompasses the entire value chain, meaning that, for nearly all organisations, scope 3 is far bigger than the other two scopes combined. This particularly applies to the oil and gas sector.

Since the end of 2019, a number of big European oil companies have announced new ambitions to reduce their greenhouse gas emissions. This plethora of climate targets began with the Spanish company Repsol, which announced a new strategy to become a “net zero emissions company” by 2050. This unleashed a climate targets “arms race” from other European oil companies such as Shell and BP.

Generally worded as non-binding ambitions, however, these climate targets vary considerably in terms of both their structure and the extent of the reductions. This makes it difficult to compare them properly without there being a uniform standard. Furthermore, the claims of a number of companies that their new targets “are in line with the Paris Agreement” are often scantily substantiated.

There are a number of initiatives that seek to establish a uniform method for setting targets. The most important, in our opinion, is the Science Based Targets initiative (SBTi).

It is working with both the private and public sectors to develop science-based methodologies to enable organisations to align their ambitions with the Paris Agreement targets. Public consultations about this are being held until the beginning of October 2020, after which a definitive methodology will be submitted for the SBTi’s final approval. The Carbon Tracker Initiative (CTI), a climate financing think tank, has already set three requirements that a target must meet to comply with the Paris Agreement: (1) it must encompass scope 1, 2 and 3 emissions; (2) it must entail an absolute reduction as well as lowering average emissions; and (3) it must apply to the majority of the production activities. The extent to which companies satisfy these requirements, as well as the actual reduction envisaged, provides the basis for comparing their climate ambitions.

Although scope 3 is seen in Europe as the standard for setting targets, that is still far from being the case worldwide. In the United States, major companies such as Chevron, ConocoPhillips and ExxonMobil have announced that they will reduce emissions from their activities (scope 1 and 2) by 5% to 10%. However, scope 1 and 2 account for just 15% of emissions from the production and use of oil and gas. This means that their ambitions equate to a reduction of just 1% to 3% of their total emissions.

Despite the fact that other companies frame their ambitions with “net zero” elements, most targets are based on an intensity approach. This method of setting targets allows companies to maintain (or even increase) their oil and gas production levels by adding renewable energy sources (few or no emissions) to their portfolios to reduce their overall emissions intensity. Companies thus aim to lower their relative emissions without reducing the absolute emissions generated by their production of oil and gas. If they added sufficient renewable energy sources, actual oil and gas production and the associated absolute emissions could in practice increase. Targets must therefore have an absolute basis in order to achieve a meaningful reduction of total emissions and stabilisation of global warming in line with the Paris Agreement targets.

Finally, it is important that targets apply to all of a company’s activities, or at least the vast majority of them. BP’s climate targets, for example, do not apply to its stake in the Russian oil company Rosneft, which represents 29% of BP’s total production. And ExxonMobil’s targets apply solely to its stake in Imperial Oil, a Canadian oil producer that accounts for just 5% of ExxonMobil’s entire production.

The above table shows that only Repsol and Eni’s targets satisfy the aforementioned requirements and thus meet the ‘Hallmarks of Paris Compliance’ according to Carbon Tracker. Of the two companies, Repsol has set the more ambitious target, specifically absolute “net zero” by 2050. Although it has not set any absolute interim targets, it currently has the most ambitious target which is closest to most scenarios for limiting global warming to 1.5 degrees Celsius. And although Repsol has yet to take certain measures to be completely in line with the Paris Agreement and thus to mitigate transitional risks, its targets show that it is on the right track.

FROM AMBITION TO PRACTICE

Reductions in absolute emissions are needed not only to achieve the Paris Agreement targets, but also to mitigate the financial risks that the energy transition entails for oil companies.

Under pressure from legislation, the falling cost price of renewable energy and altered consumption behaviour, the carbon budget appears to pose not only a societal threshold, but also a financial one. Oil companies will increasingly see their margins from investments in new projects becoming less and less attractive.

The lifespan of proven oil and gas reserves generally averages 13 years. A company that increases its fossil fuel reserves will probably face lower demand and thus lower prices, or higher production costs due to tax on CO2, for example. In a lower-demand scenario, newly acquired reserves will run the risk of not being economically viable. This risk could also be relevant to existing reserves with high production costs, depending on the rate of the energy transition.

Partly in view of the extremely low oil prices seen in recent months, companies are increasingly recognising the need for change. BP’s CEO, for example, recently acknowledged the constraints of the global carbon budget and expressed the desire for BP to become an energy company by expanding its activities in electricity generation and distribution.

Despite that acknowledgement and investments in new technologies, most companies continue to maintain a business model that is entirely dependent on revenue from oil and gas. As a consequence, Shell for example, remains highly susceptible to volatile oil prices which have resulted in a 30% narrower margin and massive write downs over the past year.

In recent years, only the French company Total has truly anticipated the transition by acquiring offshore wind energy and charging network companies, for example. Renewable energy generation now accounts for about six per cent of Total’s entire revenue. Although a number of investors, including ACTIAM, tabled a resolution at the shareholders’ meeting this year requesting Total to push its target-setting, the company is leading the pack in reducing its dependence on polluting fuels. We therefore see that, like Repsol, Total is adapting itself to make the transition possible.

Percentage of origin of total revenue 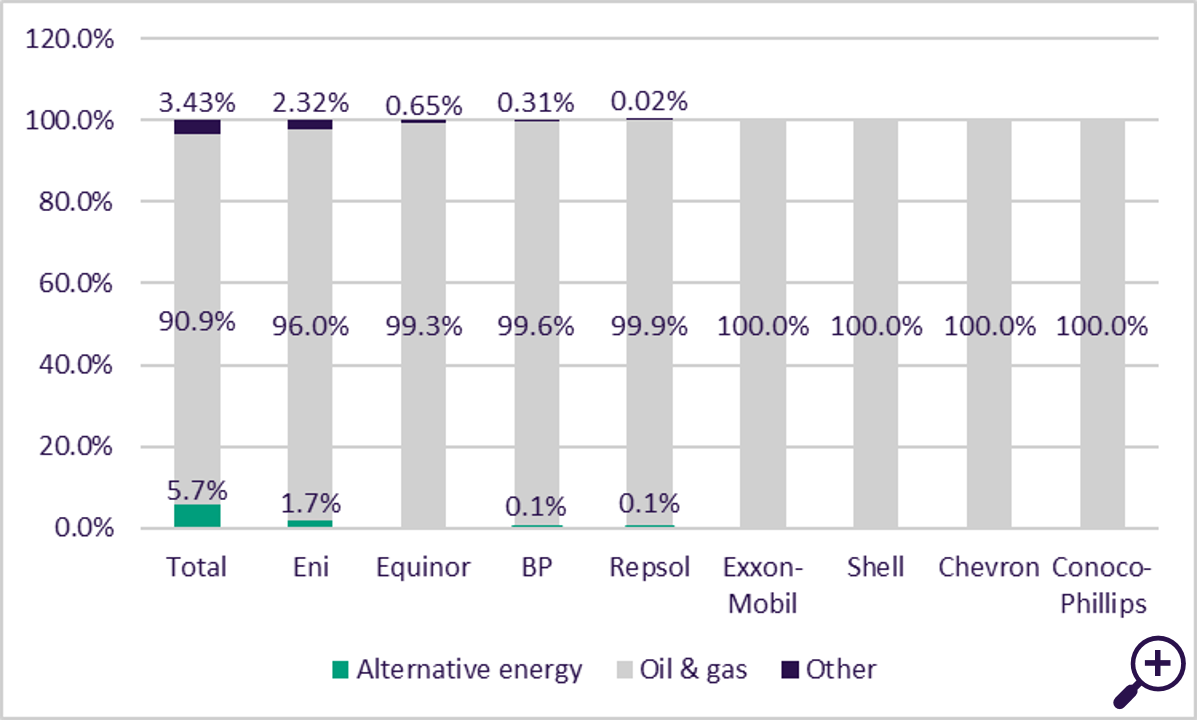 ENERGY TRANSITION AS A SURVIVAL STRATEGY – BUT NOT FOR EVERYONE

The oil and gas sector is feeling the heat and BP and Shell’s announcements of write downs on oil and gas assets totalling billions of euros are an example of the growing impact of the energy transition. This is a logical step, but not the only one, and it is not one that every oil and gas producer will be able to take. The more specialised companies (such as those in the shale gas sector in the United States) are in troubled waters, with a number of insolvencies as a result. The recent crisis showed that these companies pose a considerable risk for investors, not only in the long term but also in the near future.

It will not be long before it becomes clear which companies will be able to take on this transition and which will have to pursue a different direction. This means that consideration by companies of climate targets together with their strategies for achieving them, carries huge financial importance. Investors should be critical of targets. Even more importantly, however, they should also ask themselves whether some companies are actually capable of achieving their ambitions and the Paris Agreement targets.

“Paris is still far away,” former cyclist Joop Zoetemelk once said. But there is a high probability that, like stragglers in the Tour de France, a number of companies will not be able to realise their ambitions and will never reach Paris.