The meat sector has gradually taken over the stage in the debate over ESG concerns, and not in a positive light. The industry has long been known for its poor labour practices, negative impact on the environment and animal welfare, and potential risks to public health.

The sector’s enormous contribution to climate change and deforestation is under examination alongside recent widespread media attention that has led to calls for improved worker standards and tightening regulation. With increasing scrutiny by regulators, NGOs and investors, a long coming reckoning approaches the industry, now compared by some with the Oil sector: it needs to change quickly if it wants to survive1.

Investors exposed to meat producers and the fast-food sector through their portfolios may be sitting on a time-bomb. They must take a close look at their investments to differentiate among meat companies that are facing these challenges head on and those that continue to ignore the risks.

The biggest investors in the meat and dairy industries ($bn) 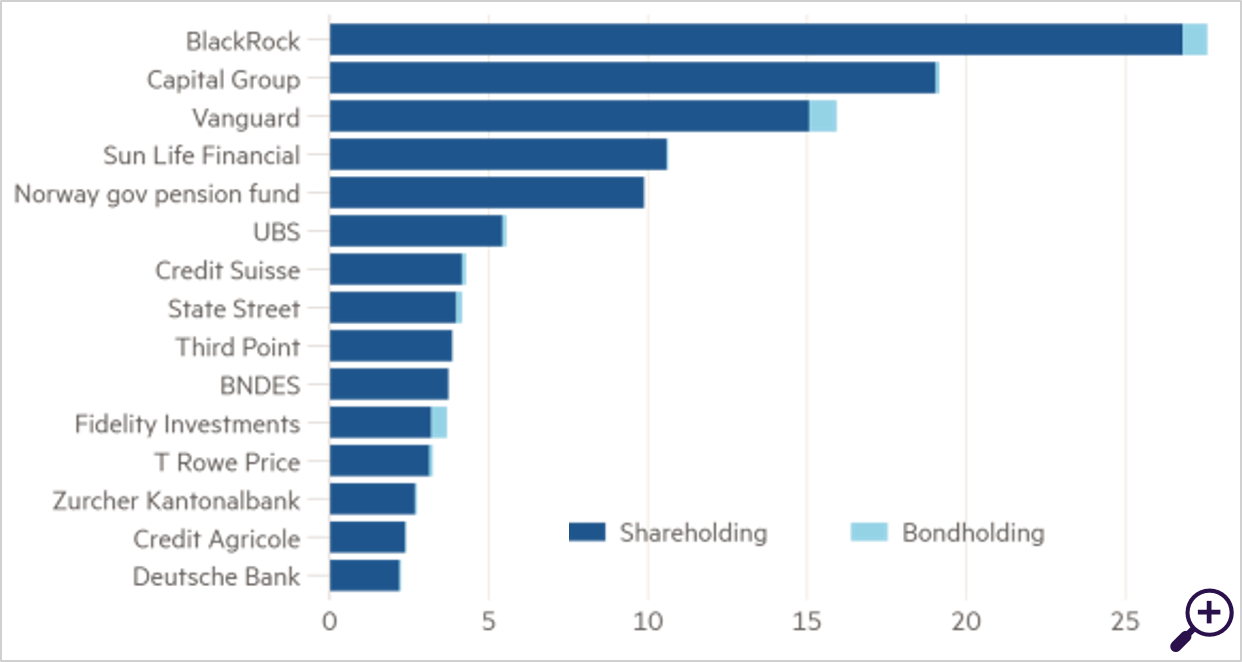 Estimates are that global livestock production is responsible for 14.5% of all man-made GHG emissions2. Cattle alone is the largest global contributor to Methane emissions, representing 21% of its total emissions3. The sector is also a main driving force of deforestation, particularly in Central and South America, directly impacting natural resources of global importance4. Regulatory attention to deforestation has only increased, with an example of the UK government’s recent consideration of a new law to prohibit large companies from selling products grown on land that was deforested illegally5.

With undeniable evidence of the giant contribution of livestock to climate change, coupled with countries’ commitments to address the issue, as through the Paris Agreement, further policy action is highly likely. A carbon-tax on the meat sector has gained great momentum, with studies defending this path as the only way forward to keep global warming below 2 degrees.

FAIRR has recently incorporated the possibility of carbon taxes on meat into an innovative financial modelling tool6 assessing 40 global meat giants, indicating that carbon taxes could cost them up to $11.6 billion of EBITDA by 2050, an average of 5% of each company’s revenue. The sector is also behind on its transparency and climate change assessments, with only two of the 43 largest meat producers publicly disclosing scenario analysis (compared to 23% of Oil & Gas companies, for instance)7. This has made it difficult for investors to get a sense of how prepared meat producers are to handle the regulatory developments and changing consumer trends.

Diversification away from less carbon intense production is thus an urgent topic for the sector if it is to ensure its survival and profitability. While there is diminished risk for companies with diverse animal protein activity, diverging away from animal-based protein may be more future-proof.

Concerns are not limited to its environmental risks; labour issues have long permeated the meat industry as well. These are prevalent due to the nature of the work involved: there is a high risk of injury, coupled with widespread lack of health and safety measures and long hours8. Reports have shown that meat producers tend to hire migrant and temporary workers, who lack access to sick pay and are susceptible to illegal wage deductions, with insufficient collective bargaining rights.

Although we often believe such conditions are only present in emerging or under-regulated countries, they also occur in countries as The Netherlands, where meat plant workers have recently made allegations of abusive treatment including poor working and housing conditions9.

Injuries in meat processing versus other industries 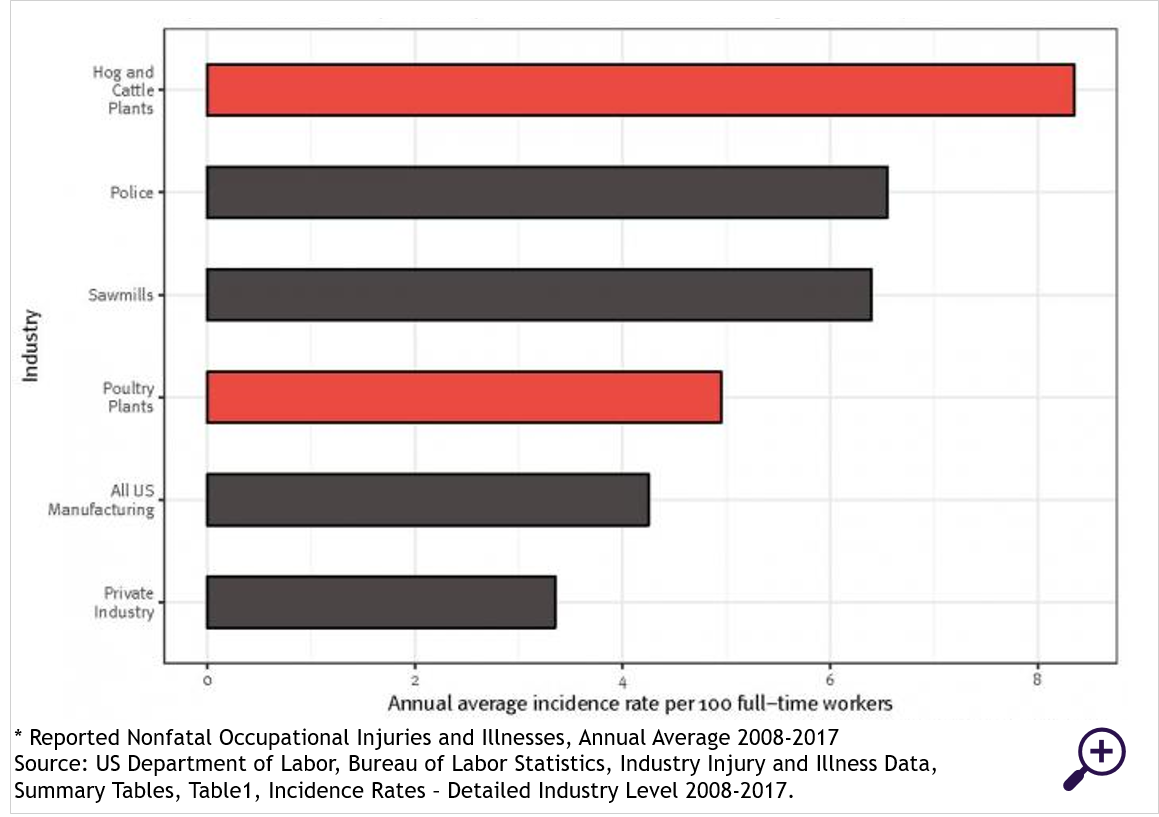 The labour conditions in the sector were heavily exacerbated with the spread of the Coronavirus, which also revealed underlying weaknesses that were previously less acknowledged. It became apparent that an industry that structurally ignores health and safety standards, could quickly face financially material consequences overnight. Factories were forced to shut down across the globe. Wrongful death suits were filed against companies, JBS SA being among these10. It has resulted in a higher level of scrutiny on companies by trade unions and governmental agencies, with countries like Germany creating proposals to address the labour rights insufficiencies, including minimum standards for employee accommodations and banning of subcontractors11. The quick change in regulation could put investors at risk if the affected companies are not able to shape up12.

It is thus clear that environmental and social risks in the sector have been long overlooked, pointing to a governance failure by companies. The abundance of governance related issues in itself also poses an imminent risk. Some of the related issues stem from the fact that a few large companies dominate the market. In China, WH Group, the largest global pork producer, was given government subsidies to make large foreign acquisitions and they have announced intentions to spend billions more to acquire European meat processors13.

In the U.S., Tyson Foods, National Beef, JBS and Cargill process more than 80 percent of the beef sold in the country14 while still aiming for further consolidation. This increasing concentration makes supply chains weaker and gives companies more control over public policy. This can jeopardize food safety standards, with players becoming so large that they attempt to influence and control inspections . We will likely see more food safety controversies as companies are increasingly taking on inspections themselves rather than having them conducted by third parties15.

The case of JBS SA is an example of how widely the risks typical of the sector can impact a company’s operations. A Brazilian company long known for its controversies, it was found that in 2017 it bribed nearly 2,000 elected officials to falsify inspections and to secure government funding. The USD 3.2 billion fine levied for this scandal were the highest in Brazil’s history16. The company was not alone though. BRF, a Brazilian peer also paid off inspectors to allow rotten meat to stay on the market, clearly endangering public health. Some of the expired meat containing salmonella with intentional additives to cover up the fact that it was spoiled, was exported internationally with falsified certificates.17, 18

BRF lost about a fifth of its market value in 2018 after the news broke19 and since then its shares have not fully recovered. 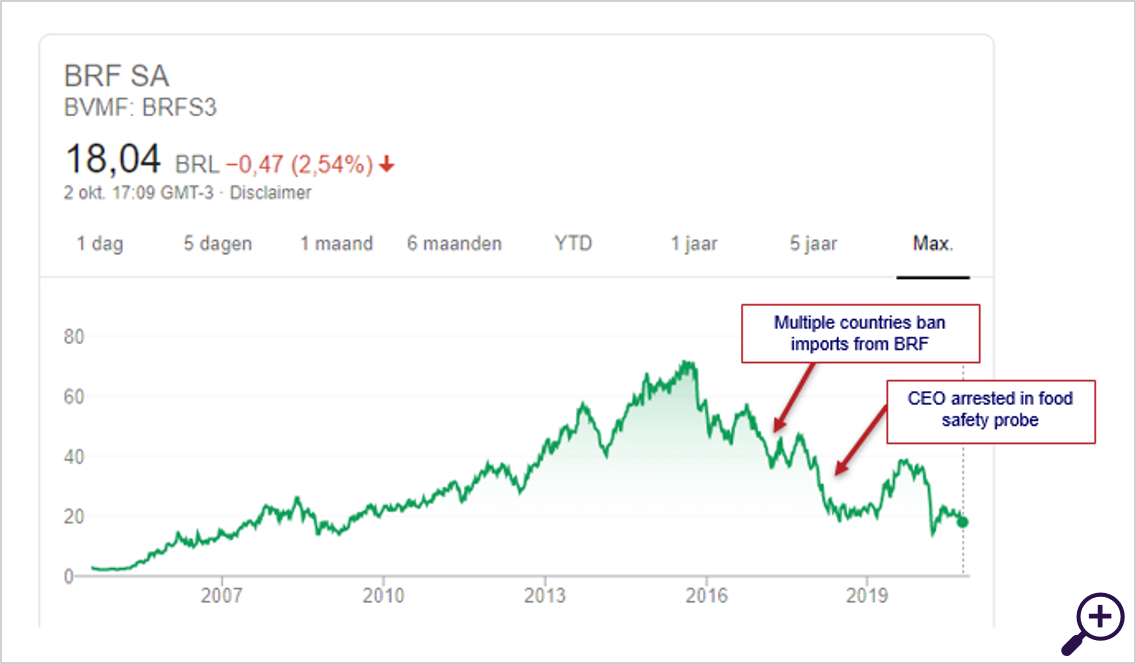 These pricing and food safety scandals pose significant material risks to the companies and investors, as customers and countries lose trust in meat products and regulatory and legal ramifications are imposed.

THE CURRENT AND FUTURE TRENDS

As good governance is considered a starting point for better management of ESG risks, the findings by FAIRR are not surprising: three quarters of the largest 60 meat, fish and dairy companies are considered at high risk for lack of management of their exposure to ESG issues, driven by factors such as product recalls, injury rates, and poor disclosure about their supplier engagements related to deforestation20. Investors can use these insights to identify leaders and laggards in their own portfolios. For example Fonterra, a dairy cooperative in New Zealand was identified as a top performer whereas Walmart supplier Cal-Main Foods in the U.S. was a laggard especially for lacking measurement of its GHG emissions21.

Banks and investors holding investments in Brazilian meat companies are also being criticized for their links to rainforest destruction22. ACTIAM is among the investors taking a firm stance on the associated risks. In July, ACTIAM excluded JBS SA from its investment universe, following the evaluation of its engagement with the company. After several dialogues, ACTIAM found that JBS did not show sufficient progress in managing deforestation risk, corruption and labour issues. Additionally, this summer, ACTIAM joined an investor led campaign representing more than USD 2 trillion in assets under management, asking the Brazilian government to commit to meaningful action on Amazon deforestation, together with companies in the beef industry. Some investors have vowed to hold off on new investments in the region or planning to divest if improvements are not shown23.

The growing concerns over climate, health and animal welfare are increasingly driving people towards plant-based alternatives, which can represent a revolution for the meat sector. Predictions suggest that the growth rate of meat consumption could slow by half in the next ten years24. Barclays predicts that alternative meats will grow to account for about 10% of the entire meat industry25. The Economist dubbed 2019 to be the ‘’Year of the Vegan’’ and acknowledged that this is a global movement that continues to surge26.

This changing context presents plenty of opportunities for investors. In addition to monitoring the companies’ management of the noted risks, looking for companies that are improving the sustainability of their product offering is another path for investors. Tyson Foods, for instance, has made investments in Beyond Meat and Memphis27; Cargill has invested in a cellular agriculture start-up on the search for protein diversification28; and Danone is making a strong strategic move in this direction as well. Companies are starting to acknowledge that this is a necessary shift. The change in the meat sector may be here to stay and investors should turn up the heat on the sector to avoid getting grilled by stakeholders on their involvement. 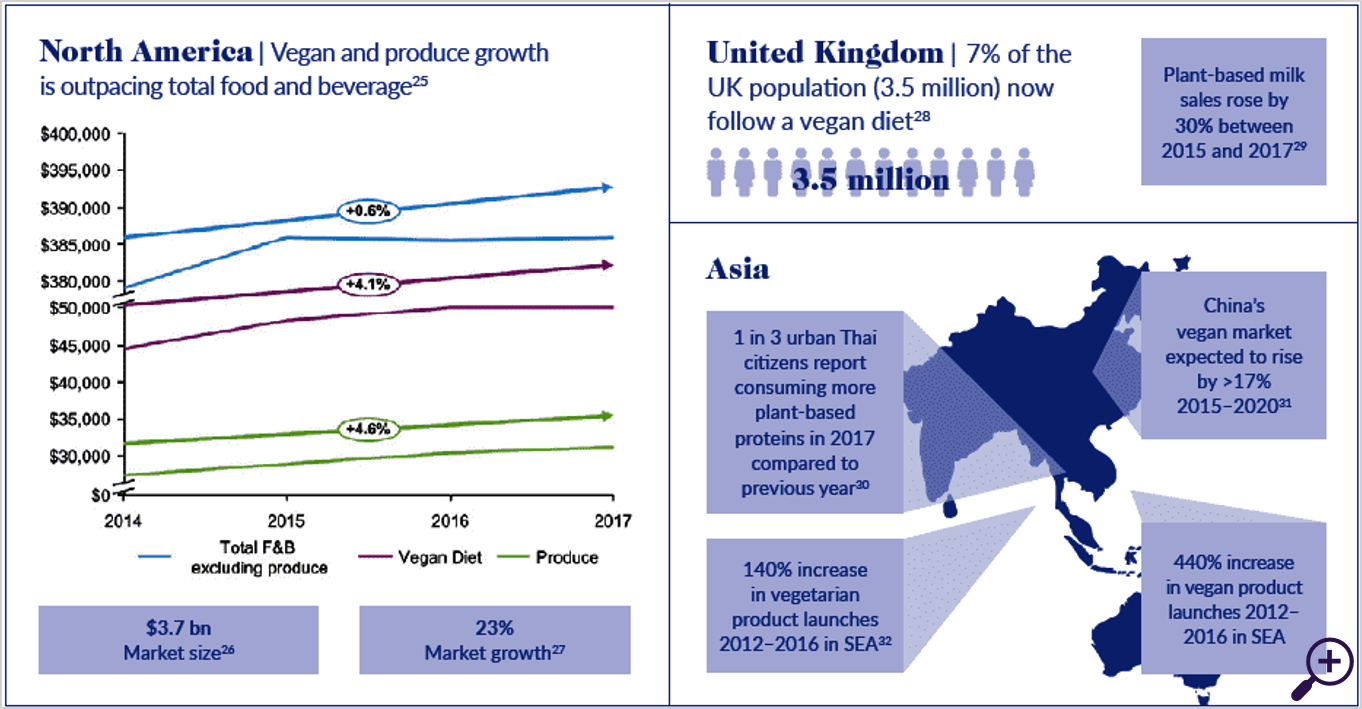 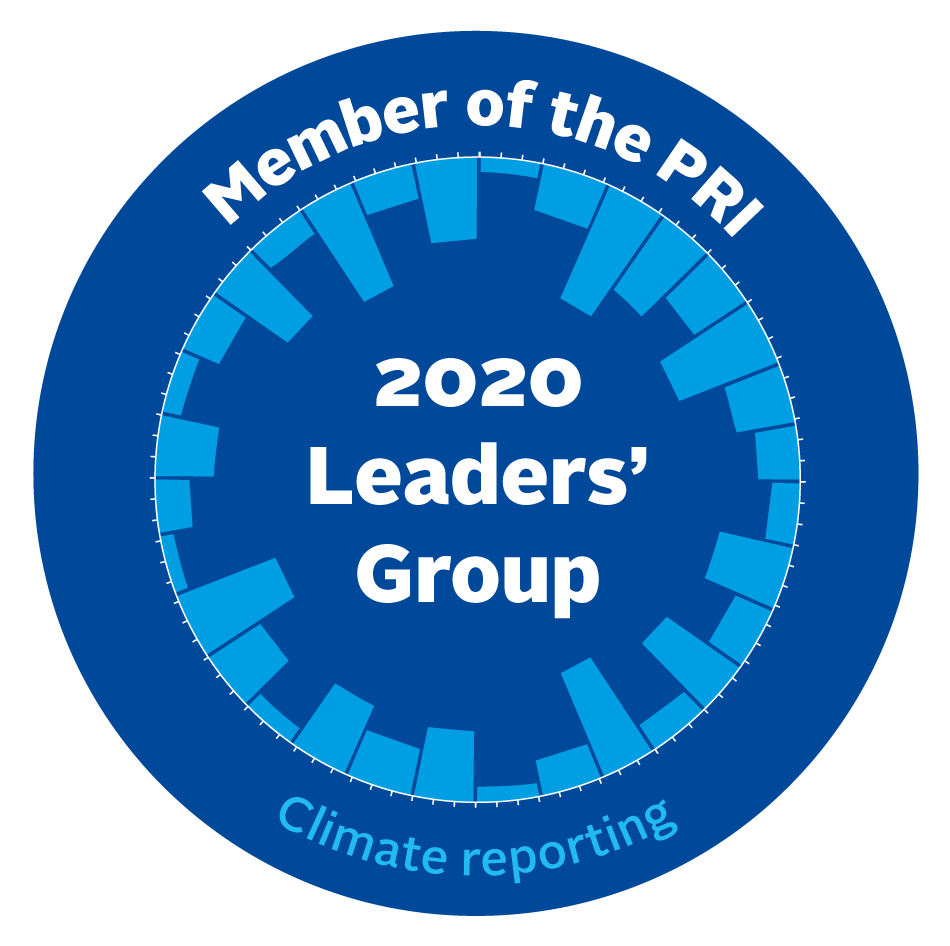