On 18 May 2021, the International Energy Agency (IEA) published its report “Net Zero by 2050. A Roadmap for the Global Energy Sector”. The IEA was established in 1974 as the oil sector watchdog of Western countries. Over the past 47 years, this agency has mainly been considered a strong supporter of fossil fuels. This is precisely why its report came as a big surprise to the oil sector, politicians, climate activists and investors alike.

The report outlines how carbon emissions could be reduced to zero by 2050. That goal can be seen as a necessary condition for complying with the Paris Climate Agreement, which aims to limit global warming to 1.5oC (above pre-industrial levels). One of the report's key recommendations, to contain global warming, is for energy companies to halt all new oil and gas exploration projects as of this year.

The oil and gas sector lags other sectors in attaining the goal of net zero carbon emissions by 2050. Of course, there are numerous reasons for this: the transport sector alone will remain a major consumer of oil for some time to come.

In addition, there is always the point that these companies will not want to get rid of their existing oil fields for a song, nor will they want another investor to take them over with nothing actually changing in the end. The exploration of new oil and gas fields is another story. A key driver for businesses to continue searching for new oil and gas fields is their expectation that those activities will remain profitable in the years to come. Businesses are naturally focused on achieving sound returns for their shareholders. It is then about new investments that can also be developed differently (faster and more sustainably).

THE UTILITIES SECTOR IS ON THE RIGHT TRACK

Utility companies are setting themselves apart from oil and gas companies in a positive sense. This is partly due to market differences, other shareholders and more stringent regulations.

The table below shows that this does not necessarily affect returns. The table shows returns versus the capital employed. While this is only one variable and the companies shown differ in size, financial strategy, activities, etc., it does show that there are opportunities to maintain returns on investments in sustainable activities. 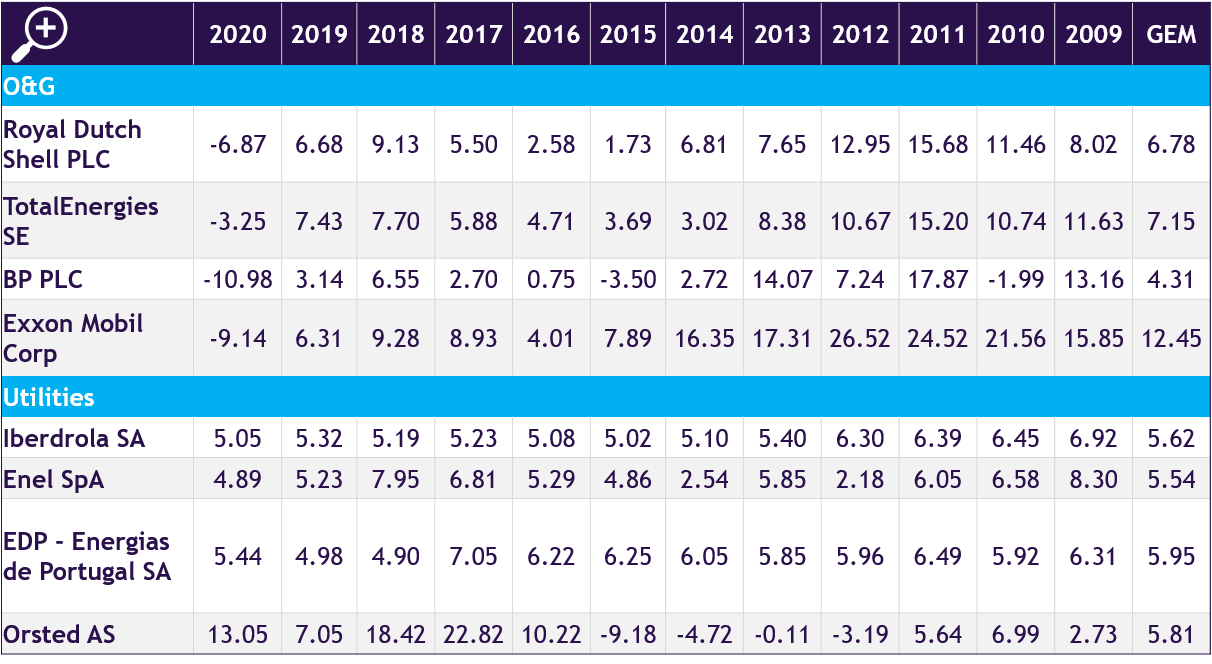 Further, we do not need to fear that oil and gas companies will oust utility companies. According to Bloomberg’s calculations, approximately $11 trillion in investments is needed over the next 30 years for the energy transition to succeed. To compare this: up to 2025, Iberdrola is ‘only’ going to invest €75 billion to end up increasing its sustainable energy capacity from 34 GW to 95 GW by 2030.

Since 2009, oil giants Shell, Total and Exxon have had a higher RoC per year - on average - than utility companies, but the latter have a more stable RoC. And more importantly: oil and gas companies have encountered more troughs in recent years. Iberdrola & EDP are utility companies that generate much of their electricity from sustainable energy.

It takes time and investment to transform from a traditional oil and gas giant to a sustainable energy player. This is based on the many examples from the utilities sector.

A well-known example is the German ‘Energiewende’. In 2011, Germany decided to phase out nuclear power. Now, 10 years later, it is still working hard to make the plan work. Orsted completed the transition at a faster pace, but that cannot be copy-pasted to the larger oil and gas companies. Orsted benefited from its limited size and the patience of its majority shareholder (the Danish government).

IMPACT ON THE INVESTMENT PORTFOLIO

We believe that oil and gas companies should not be invested in, unless… they show - through engagement - that they want to and are going to change in the short term. Exclusion can be a ‘last resort’ though. As an investor, you would then no longer be able to exert any significant influence on the relevant company. It is also preferable to exclude as few larger groups of companies or entire sectors as possible, as it affects diversification and/or makes for a lack of additional yield in your portfolio, among other things.

Carbon intensity, and the lack of change at those companies, is not only a social problem, but a financial risk too. If the assets have to be written down at some point, these things will affect the value of those companies and, by extension, their repayment capacity (creditworthiness). It is therefore important to weigh this risk against the lack of spread or additional yield in the portfolio.

To show this, we took the iBoxx Corporates (Euro bonds of at least €500 million from both banks and companies with investment grade ratings or higher) as a starting point. The oil and gas sector is a separate sector in this index. We compared this sector to the “non-financials” with similar ratings and to utility companies. The comparison with the utilities sector is made once again because of the similarity between the projects they engage in. While the average rating of utility companies is lower, they generally have stable and predictable cash flows due to regulation. On average, the rating is somewhat lower due to higher leverage. Nevertheless, this sector is considered a relatively safe category.

What is the impact on the investment portfolio if you do not invest in the oil and gas sector and reinvest it in similarly rated non-financials or utility companies?
We compare the returns in the chart below: 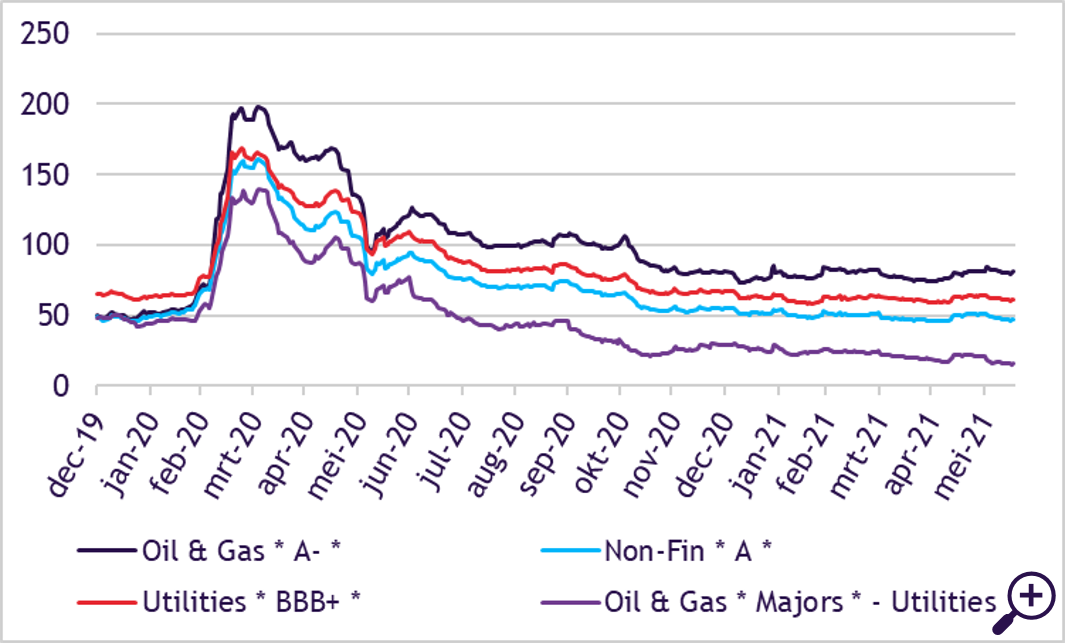 Does that paint the complete picture? No. To weigh all aspects, we also need to consider the reason for the difference and the risk characteristics. We have listed some of these characteristics in the table below.

The difference can be explained by the fact that:

The more nuanced conclusion is that there is more to a company than yield, spread and rating. It is therefore important to have a deeper understanding of the sectors and the differences between them. If you do not want to invest in oil and gas companies because of carbon intensity (and the related risks), that does not necessarily mean that you are relinquishing yield.

To compensate for the higher spread on oil and gas companies, you can opt for a larger allocation to hybrid bonds within non-financials and a lower allocation to 'CSPP eligibles' (bonds that are bought by the ECB and trade tighter), so the average spread of the portfolio increases.

Besides, the companies that are not considered ‘large’ have different risk profiles. If you only look at the large, often integrated companies, your spread will grow.

As stated earlier, we at ACTIAM do not invest in oil and gas companies, unless... In practice, several oil and gas companies have been making sufficient changes. ACTIAM has decided to include companies with a clear corporate strategy and vision on how to reduce carbon intensity in its investment portfolio. In that regard, we are not just aiming for the dot on the horizon, but we are also setting realistic, intermediate goals.

A good alternative is to invest in sustainable bonds. We believe that sustainable bonds offer a great way to fund sustainable causes while making an impact. This market has enormous potential, but still only constitutes 2% of the total investment grade market.

These sustainable bonds include the popular green bonds, which are considered less suitable for the oil and gas sector. This is because sustainable investments can be allocated to this bond, even if the issuer of the bond is still active in oil and/or gas projects. This allows the issuer to pretend to be more environmentally friendly, which encourages 'greenwashing'. Sustainability-Linked Bonds (SLB) are a more suitable alternative for the oil and gas sector.

We do not expect oil and gas companies to shut down all their existing profitable operations overnight. The utilities sector and its projects are examples of how the transition can be shaped. Oil and gas companies need to formulate a clear strategy on how they want to proceed towards net zero emissions. Sustainable bonds such as the SLBs are a good way to demonstrate commitment in this regard.

As an investor, you should keep tabs on whether a company is changing swiftly enough. If not, there are plenty of investment opportunities to replicate the return and risk characteristics of the oil and gas sector.

We endorse the recommendation of the IEA report. For investors, we would translate this as follows: “Don't invest in traditional oil and gas companies, unless...”. The ‘unless’ depends on how quickly and credibly these companies cooperate in the transition to a sustainable society. It is somewhat understandable that companies do not want to get rid of their existing oil fields for nothing or with the risk that another investor takes over and nothing actually changes on balance.

The exploration of new oil and gas fields is another story. These are new investments that can also be developed differently. The renewable energy projects which utility companies are undertaking - often to generate electricity - are good examples of this. It seems logical for larger oil and gas companies to move in that direction. This does not have to affect returns. In other words: oil and gas companies no longer have an excuse not to change. And if an oil or gas company does not change fast enough, there are plenty of alternative investment solutions for the fixed income portfolio.