Stock markets are anticipating economic recovery in Europe, although how far the economy will bounce back is not yet clear. Despite the positive news about coronavirus vaccines, investors can expect extra volatility to continue in the first half of 2021. There are, however, clear plus points for European equities, such as their leading position in terms of ESG (environmental, social and governance) and relatively low valuation versus the United States.

The key drivers for equities will be the rapidity at which COVID-19 is eradicated, along with the central banks' economic stimulation policies. The former will be a major factor in the economic recovery while the latter will be crucial for share prices. Both will have a positive impact next year.

In November this year, investors were treated to the welcome news from pharmaceutical companies Pfizer and Moderna that they had each developed an effective vaccine. The stock markets reacted euphorically, buoyed up by the hope that the economic damage caused by the coronavirus might soon be reversed. Central banks will continue to support the financial markets, particularly in 2021, but perhaps beyond that as well. In the United States, the Fed announced earlier this year that it was stimulating economic growth rather than pursuing the traditional goal of limiting inflation and that it would only ease up if it anticipated significantly higher inflation. European investors can also count on continued fiscal support from governments for still some time.

PROFIT DEVELOPMENTS, TRADE AND THE EURO

In the long term, share prices are determined by company profits. According to Bloomberg, cost-cutting measures enabled many European companies to limit the decline in profits caused by the lockdowns, to an average dip of 22 percent in the third quarter. In 2021, businesses will have fewer cost-saving options because of the severe cuts they have already made. However, fiscal and monetary measures as well as the economic recovery will have a beneficial effect. In addition, European companies will benefit from increasing global trade stimulated by Chinese growth and an American president who is poised to steer a more multilateral geopolitical course.

Analysts are predicting major profit gains. Yardeni, an American research organisation, forecasts average profit growth of almost 50 percent for European companies, against 20 percent for companies in the United States. It presented these prognoses just after the result of the US presidential election was announced.

One obstacle for the European export sector, however, will be a strong euro which, according to Bloomberg, rose approximately seven percent against the dollar in the first 11 months of 2020. Any further increase will be bad news for export companies. 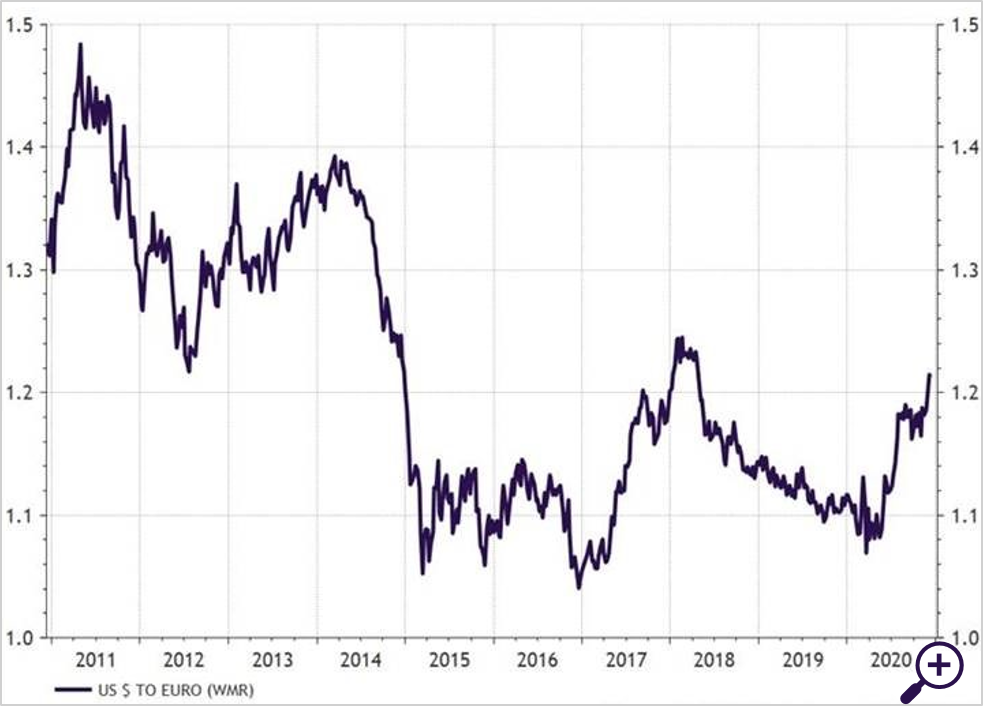 International investors are traditionally less attracted to European equities than to American ones. Reasons they cite for this include regulations, administrative fragmentation and a less flexible job market. Right now, however, the fundamentals for European equities are looking good.

The response to the pandemic and the scale of the fiscal support packages help Europe’s recovery. In the US, Biden will also be implementing stimulation measures - an American Green Deal - but with the balance of power between Democrats and Republicans in the Senate still unknown, it is not yet clear how extensive that support package will be.

The Republicans hold a strong position in the Senate and they may even gain a majority, thereby minimising the likelihood of a substantial tax hike in the US Furthermore, US stock prices have already recovered considerably and the S&P500 is now trading very high. European shares have a much lower price-earnings ratio and therefore greater upward potential. The rotation of big tech companies towards cyclical values is also a positive development for European markets, which have relatively little tech but far more cyclical companies. Another major plus for the European versus the US market is the emphasis on ESG. One illustration of this is the fact that, more than anywhere else, both governments and businesses endorse and actually support climate targets. This pioneering role makes investing in European equities relatively attractive to global institutional investors whose ESG demands are increasing.

The European Commission forecasts a contraction of 7.8% of real GDP for the eurozone this year, but a rebound of 4.2% for 2021. According to its calculations, the eurozone should return to pre-pandemic levels by the end of 2022. The greatest risk facing European and other stock markets is the possibility that beating the pandemic may take longer than expected.

Further harsh measures will effectively put the brakes on the expected economic recovery. That could usher in a new round of support measures by the ECB and European governments, providing renewed support for share and other equity prices.

If the recovery continues, then governments will phase out their fiscal support. That could pose serious problems for companies whose debt burden has ballooned during the pandemic, particularly if this is accompanied by a monetary policy that is also less rigorous. S&P Global Ratings expects a default rate of 8% for the European high yield market in 2021, which is a considerable increase over the current level (just under 5%). Finally, there is still Brexit.

The British departure from the European Union has been eclipsed by COVID-19 in this transitional year. The optimistic scenario is that the EU and the United Kingdom reach a last-minute agreement on the terms of their separation, which would be a boost to the markets. However, if the uncertainty lingers, then that would negatively impact European stock markets and primarily on the British pound.

Investors will continue to focus on monetary policy over the next few years. Every step towards tapering will have a negative impact.

On average, returns on shares are expected to be less high in the coming years. The dichotomy between companies that pursue sustainable policies and those that do not will also show more clearly in their returns. Regulations, an increasing emphasis on sustainability among institutional investors and unsustainable business models in sectors such as energy and the aircraft, manufacturing and car industries will take their toll. Investors will have to be aware not to invest in so-called stranded assets.

The sea of liquidity now washing over the markets will ultimately exact a price. The ECB's balance sheet total has risen by almost 40 percent over the last year. The money supply has also increased considerably. In the long term, this could lead to rising inflation and interest rates.

Investors are in "risk-on" mode. European equities clearly have upward potential in 2021, given their relatively low value now. However, setbacks in the fight against COVID-19 could throw a spanner in the works. The risk in the mid-term is that central banks withdraw their support. That would probably go hand in hand with rising inflation. The growing importance of ESG will continue to be a trump card for European shares in the future.