While the dust is settling down from the initial outbreak of COVID-19, it might be a good time to wonder what the future will hold for the financial inclusion sector. Can we learn anything from the past?

COVID-19 AND THE IMPACT ON EMERGING MARKETS

Since the WHO declared the COVID-19 outbreak a public health emergency of international concern in January, it has spread across the globe. Stock markets in major economies, such as the United States, the Euro area, and Japan, all fell sharply and witnessed a surge in implied volatility as skittish investors tried to factor in the latest risks posed by the new virus. At the same time, credit spreads have widened broadly across markets as investors reallocated from relatively risky to safer assets. High-yield and emerging-market bonds are hit particularly hard by these reallocations1, 2.

According to the IIF3, debt issuance in emerging markets in March froze and foreign investors withdrew a record US$83bn in the 30 largest economies - outflows that widely exceed those experienced in the financial crisis of 2008-09. Some US$23bn has found its way back in April and May, but mainly from investment grade countries. Previous bouts of large Emerging Markets’ outflows show that periods of inflows are common after sharp outflows, but a full retracement of portfolio flows can take a much longer period, highlighting current and future financing needs4, 5.

The impact of COVID-19 on Global Extreme Poverty 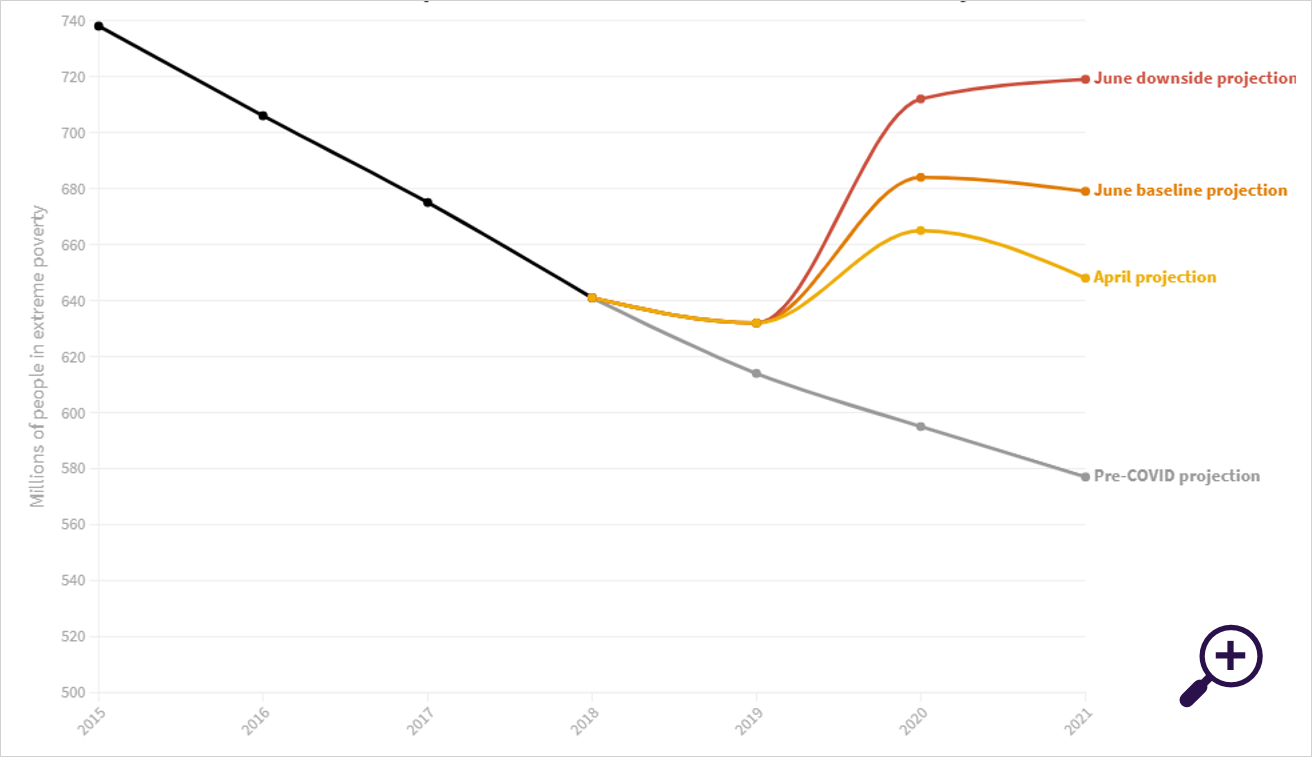 Source: Lakner et al (2020), PovcalNet, Global Economic Prospects. Extreme poverty is measured as the number of people living on less than $1.90 per day.

Lockdowns imposed by governments all over the world have come at a heavy cost to citizens, with poverty levels on the rise again.

The World Bank, has warned that up to 71 million people will be pushed into extreme poverty6 and another 176 million into poverty7 by the economic consequences of the COVID-19 crisis8.

At the same time, the ILO has assessed that at the end of April almost 1.6 billion informal economy workers (~76% of total) worldwide are significantly impacted by the lockdown measures. Estimates show that in the absence of income support measures, earnings are expected to decline in the first months of the crisis by 82% in lower-middle and low-income countries9. All in all, the pandemic affects all aspects of sustainable development and highlights just how important sustainable development is to prevent, manage and recover from deadly viruses such as COVID-1910.

Investors tend to react to epidemics, but the long-term picture is positive

IMPACT ON THE FINANCIAL INCLUSION SECTOR

Financial Inclusion Institutions (FIIs) are linked to the economy across the financing value chain: upstream, as investors provide funds to FIIs; downstream, as FIIs lend to entrepreneurs11.

The impact of the COVID-19 crisis on FIIs can therefore also be viewed along these lines. Upstream, the liquidity support from commercial lenders, both Development Finance Institutions (DFIs) and international (impact) investors, could be at risk as they also have to cope with the economic crisis at hand.
Downstream, the imposed lockdowns have an enormous impact on the end client as people are not able to run their small businesses, receive less remittances from abroad and are therefore unable to repay their loans. In most countries, governments have responded by providing moratoriums to support the end client. This puts FIIs at the risk of a liquidity crunch. In reality however, this has not been the case everywhere as from the start DFIs and international lenders have worked together to support the sector in terms of liquidity, aligning interests and homogenous reporting. This might be in part driven by the type of investments, private debt, but more so by the impact driven (long-term) mission of the investors and their continuous efforts to ‘build the sector’12.

LESSONS LEARNED FROM OTHER CRISES

Microfinance has often been perceived as less correlated to macro-economic issues because their client base is typically informal and less linked to the global economy13. But over the years, as microfinance moved to the paradigm of financial inclusion in which FIIs have become deposit-taking institutions, increased in scale, some obtained banking licenses and obtained diversified funding etc., this contributed to more linkages to the general economic environment and increasing the systemic risk of the sector.

As with the COVID-19 crisis, the 2007-2009 global financial crisis (GFC) also induced a shock both on the liability side as well as the asset side. Research done by the IMF showed that the expansion of the microfinance industry seemed to be mostly untouched during and after the GFC, although growth proceeded at a significant lower rate than before14.

The sector continued to grow at approximately 15% - 20% per annum during the crisis and was predicted to expand by 25% in 201215. Performance of the sector did reduce sharply during the GFC but compared to other markets, the microfinance sector as a whole was less impacted than forecasted16.

Certainly, the GFC resulted in consolidations in the market and FIIs that needed work out plans or went into default, but research by the IFC argued that the GFC was not necessarily the predominant cause of that. It exacerbated an overall difficult situation in certain overheated markets and may even have functioned as a trigger that exposed fundamental underlying weaknesses that had evolved due to the manner in which the industry and FIIs matured17.

The case of BRAC might provide an example of what we can learn from the lock down, in this case caused by Ebola which impacted two countries BRAC was operating in. After BRAC closed operations for 7 months, there was actually a high demand for new loans from clients who had not worked for months, clients who lost their initial capital, and clients who had lost their businesses and were in debt. The high demand for new loans was a key driver of repayments because clients were aware that they were generally expected to have active and in-good-standing accounts in order to access fresh loans18.

SO WHERE DOES THAT LEAVE US THIS TIME AROUND?

This crisis is a first in the sense that it shows both systematic risks as witnessed during the GFC and a more idiosyncratic risk like the Ebola crisis. In the past decades the sector professionalized and as a result, became more prone to systematic risk through its international lending base. It is however that same lending base that is fully supportive of the sector, supported by MOUs, investor statements and handshake agreements, which is in marked contrast with mainstream investors that fled emerging markets on a search to safe heavens. 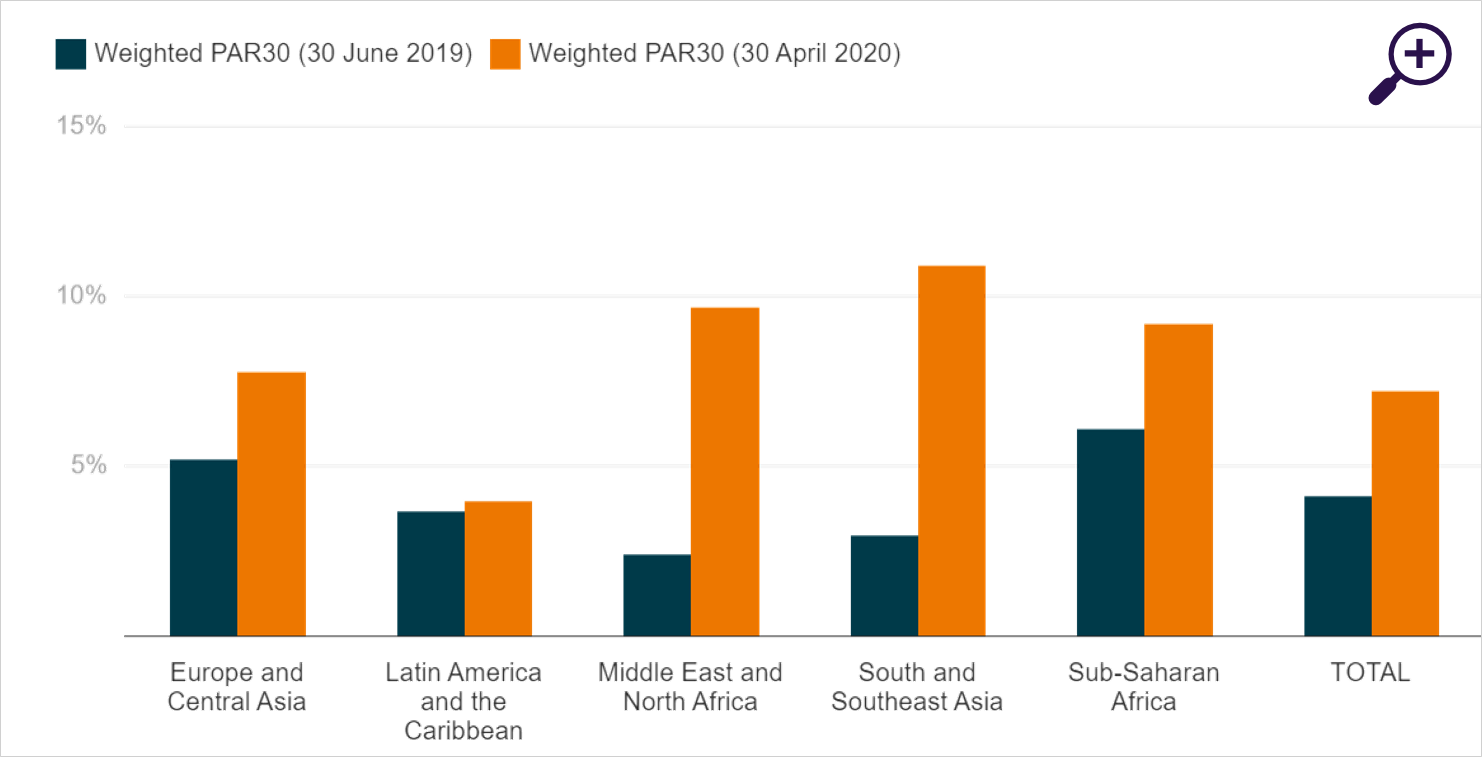 According to a survey done in June by the GIIN19, a majority of the impact investors (57%) expects to maintain their 2020 investment plans, seeking to invest the same amount of capital that they had initially expected. This is supported by extra stress testing and analyses on the actual impact of the crisis. Helping FIIs to overcome the crisis – which will require concerted action by investors, regulators, and other private and public actors – is needed to ensure that customers will have access to the resources they will need to manage liquidity when the pandemic is under control20.

The BRAC case also provides us with an example that the ease of lockdowns might also provide the sector with opportunities as people need working capital to (re)start their business. We do have to be mindful however of the risk of over-lending and the difference in credit culture across countries.

This means investors should be mindful of the risk but also take their responsibility to support viable, responsible and resilient FIIs to survive and retain the confidence of their clients. This means reinforcing FIIs’ incentive to begin lending again as the lockdown ends, thereby encouraging the repayment of loans outstanding (many of them having been restructured) and continue to invest in the sustainable development of low-income families and businesses21. In addition, this an imperfect market where no secondary market exist and fair market value valuation of investments is challenging.

It is also important that terms & conditions of financial inclusion funds are transparent and clear about the buy and hold strategy of the Fund and make sure that this is matched to the investment strategy of the investors.

All in all, the crisis is still ongoing and uncertainty about the future remains. However, comfort can be derived from experiences of the past and from highly committed investors. Even though some hard hits are still to be expected, the proven sector resilience, stakeholder collaboration and a seasoned fund manager with strong risk management capabilities could limit the impact on financial and social performance and support the sector in its rise like a phoenix.