The United Nations climate report has confirmed once again that drastic measures are needed to prevent us from being confronted with extreme weather conditions. Fortunately, more and more public initiatives are emerging to help us cope with the impact of climate change. Quite a lot of changes are taking place both in terms of investment and financing. For national and supranational governments, the involvement of private investors in the bond market is crucial for the transition to a sustainable society.

The fact that Europe, too, is increasingly being affected by climate risks can be established based on incidents but also on other factors. The German think tank "Germanwatch" has been researching climate developments for 30 years and regularly publishes a country overview with rankings based on climate damage. This is called the "Global Climate Risk Index" (CRI). Obviously, the annual rankings vary quite a bit, as natural disasters strike randomly. If we look at the rankings over a longer period of time, we notice that countries in Europe have also been affected. The 2003 heat wave in particular, which claimed more than 70,000 European lives, hit some European Member States hard. 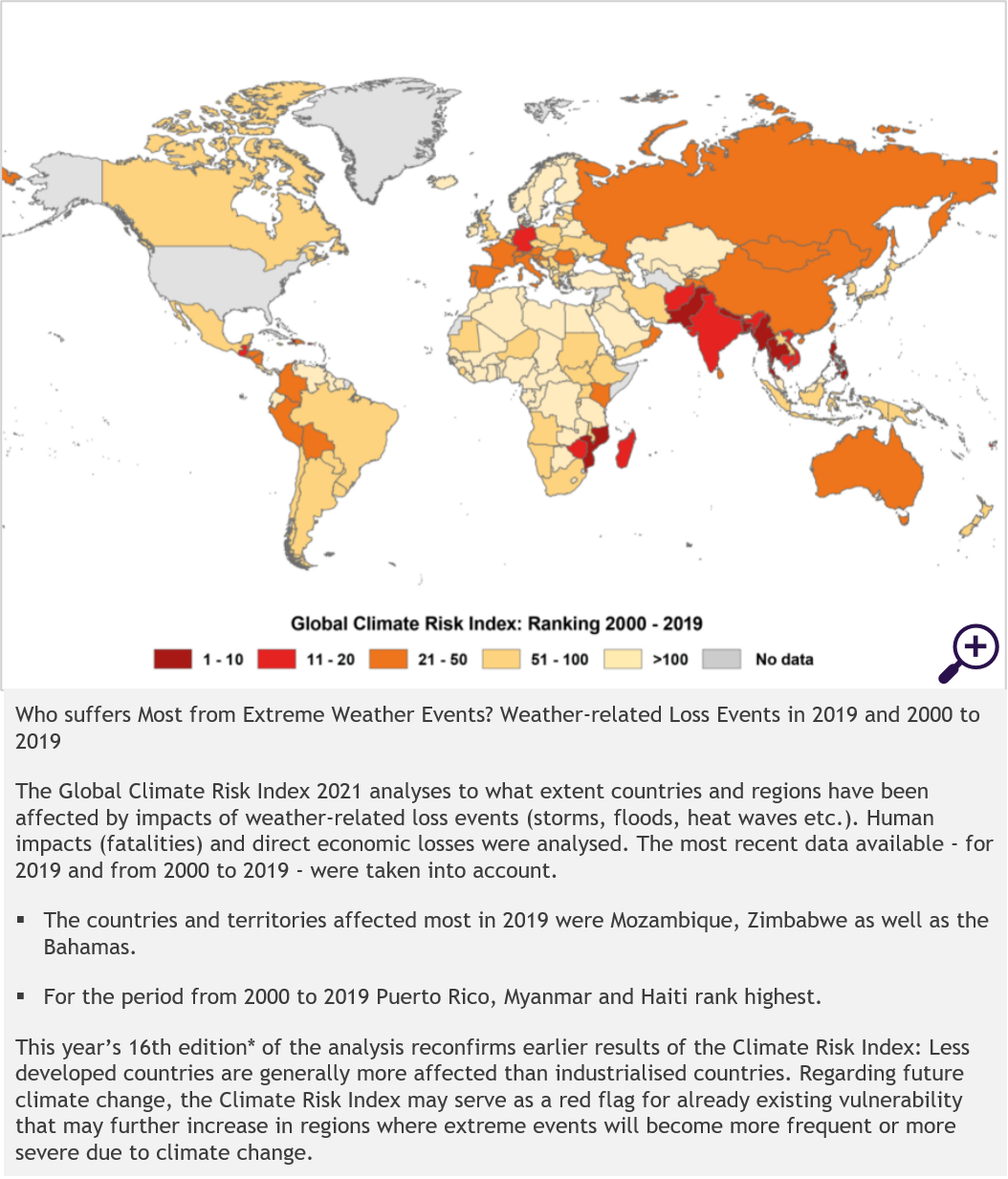 The European answer to climate change was presented as the European Green Deal which took more shape in August: by 2030, greenhouse gas emissions must be reduced by 55% compared to 1990 levels. The European Commission wants to achieve this goal through its "Fit for 55" package. It estimates that an additional € 350 billion in investments will be needed annually to meet the Green Deal and the goal of a climate-neutral Europe by 2055. This could partly be financed by revenues from CO2 emission auctions or by a European tax on plastics. Nevertheless, a large part of the financing will also have to come from issuing government bonds. Recently, the European Commission approved a proposal to support this funding. For the capital market, the proposal for a new standard for European green bonds in particular is an important development in this regard.

The EC framework ("EU Taxonomy") considers investments to be green only if they contribute to one of the following six goals:

A framework like this should also help European governments to fund their climate plans and issue green bonds. The European Commission is also fleshing out an EU standard for so-called transition bonds and sustainability bonds.
Governments have a lot of catching up to do when it comes to issuing green bonds. Currently, only €135 billion (1.5% of total outstanding public debt in nominal amounts) is classified as "green", according to the Bloomberg database. Only six countries have issued green bonds and moreover such issues were often based on a framework they developed themselves. The proposed EU framework could therefore certainly provide more transparency and standardisation in this respect. 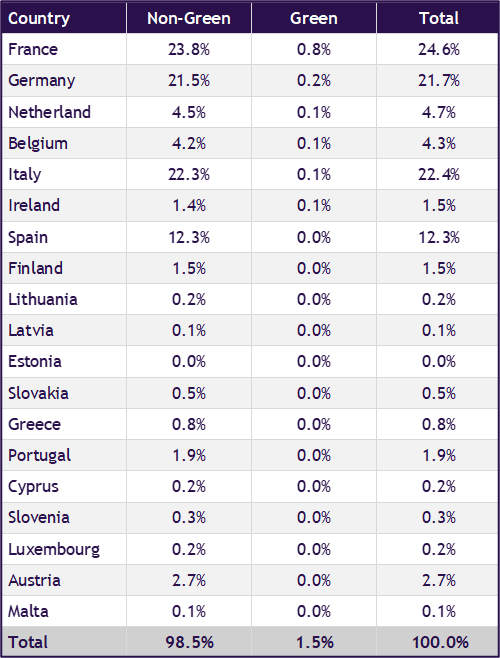 A crucial question is how countries with relatively high debt ratios will be able to fund these additional public investments. Not all countries are equally well equipped to deal with climate risks through additional public investments. The American University of Notre Dame (Indiana) has developed an index (ND-GAIN, Notre Dame Global Adaptation Initiative) that links a country’s climate risks to that country's ability to adapt.

The table below shows that the countries most at risk also tend to have less capacity to adapt. At the bottom of this European list, we see Serbia, which is particularly vulnerable as regards its food and water supplies. The Western Balkans will most likely experience continued temperature increases as well as more frequent and prolonged periods of drought and forest fires. Countries in the top half of the list also face climate risks, although these are still moderate in the global context. Denmark, for example, scores less well on water storage capacity and a large proportion of its population lives five metres below sea level (that, of course, also applies to the Netherlands).

Also rating agencies look at climate risks. All EU Member States currently have an investment grade rating and are considered to have a low risk of bankruptcy. Weaker Member States, such as Italy, Spain and Portugal, have a BBB rating. The strongest ones, such as Germany and the Netherlands, have the top rating (AAA).

Rating agencies recognise that climate risks can affect a country's creditworthiness, but so far, no European Member State has been downgraded because of that. Rating agencies use a five-to-ten-year horizon as the basis for their long-term ratings. Some European Member States also have bonds with much longer maturities outstanding (100 years in Austria, for example).

The University of Cambridge has calculated that 63 countries could be downgraded by 2030 if they do not take action. Using a realistic scenario (RCP 8.5), it calculated the negative impact of increasing temperatures, rising sea levels and other climate impacts. Germany, India, Sweden and the Netherlands would then be downgraded by three notches, the United States and Canada by two and Great Britain by one notch.

RCP (Representative Concentration Pathways) scenarios show the development of greenhouse gases in different scenarios and with varying levels of policy intervention. The names of the four different emission scenarios indicate the corresponding radiative forcing in the year 2100. RCP2.6 corresponds to a very ambitious climate policy and, in RCP4.5, numerous measures will have to be taken to reach this level of greenhouse gas concentrations. RCP6.0 and RCP8.5 indicate two possible scenarios involving few measures and few technological breakthroughs.

So for now, fortunately, it looks like appropriate measures will be taken, with the avoidance of downgrades due to climate impacts. But the measures themselves could also lead to downgrades, with further pressure from rising debt and financing costs. To avoid this, investor confidence in government bonds will have to be boosted. Initiatives like the EC green bond framework referred to above could help in this regard.

To assess the impact on creditworthiness and sustainability, every country will have to be assessed against macroeconomic and market factors. This assessment could, for example, be expressed as an ESG score which, among other things, reflects how well governments are managing sustainability factors (e.g., natural resources, political instability and living conditions) that affect growth and stability. Having a climate policy as well as a water management and biodiversity policy should carry extra weight in this regard, as the impact these factors have on the future stability of countries is becoming increasingly clear. Population growth also needs to be considered, as rapid population growth along with low development rates negatively impacts the stability of countries and increases their ESG risks. 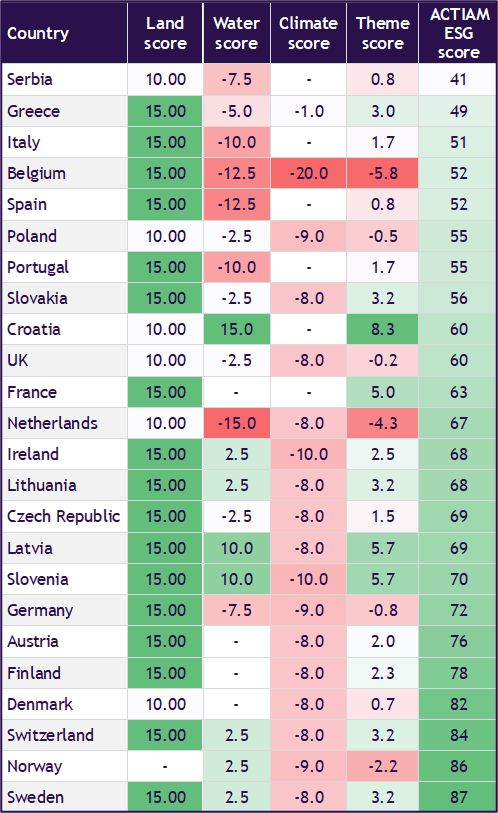 As stated earlier, climate risks also impact the government bond market. Investors have often developed their own criteria for labelling a bond "green." A "green" label from an external organisation is obviously not sufficient.

The strong demand for green bonds has, in the meantime, led to a so-called greenium in the government bond market (green bond yields are several base points lower than those of comparable conventional bonds). But even if supply increases, the greenium will not disappear, nor will it cause the green segment to underperform. There is no doubt that green bonds with clearly allocable investments and transparent reporting will continue to attract investors.

In addition, monetary support from the ECB is expected to focus more on green bonds in the future. Climate change and the transition to a climate-neutral economy could affect price stability. That would open the door to a modified ECB policy, with European banks also being judged on their climate policies and the ECB’s buyback programmes (APP) also giving greater consideration to climate aspects.

Given the expected phase-out of the wide-ranging Pandemic Emergency Purchase Programme (PEPP) in 2022 and the launch of the ECB's green bond framework, the first steps in this direction have at least been taken.