‘Don’t cry for me Argentina’

Yet again, Argentina is teetering on the edge of a debt crisis. Low-priced securities offer opportunities for entering the market, but investors should prepare themselves for high volatility. A positive outcome to the suspended negotiations with international creditors could improve the prospects for both citizens and investors.

In May, the Argentinian government lacked the means to pay approximately USD 500 million in interest on outstanding debt, after already having been granted a postponement of payment. This means that Argentina is technically bankrupt for the ninth time since its independence in 1816.

To save the country from a new economic drama, the government is negotiating restructuring approximately USD 65 billion in loans with major bondholders such as Blackrock and Fidelity. The Argentinians are asking for a lower interest rate, a haircut of the debt itself, and a repayment postponement of three years.

The parties were apparently on the brink of solution, but negotiations stalled in late June. The creditors argued that Argentina was demanding too much leeway for further adjustments of loan conditions in the future. The new deadline for negotiations was moved up to 24 July. The extreme uncertainty therefore remains.

END TO NEGOTIATIONS IS CRUCIAL FOR INVESTORS

The Argentinian economy has now been in recession for two years. The markets collapsed in August 2019, following the primary elections that proved disastrous for Mauricio Macri, the country’s reformist president at that time. 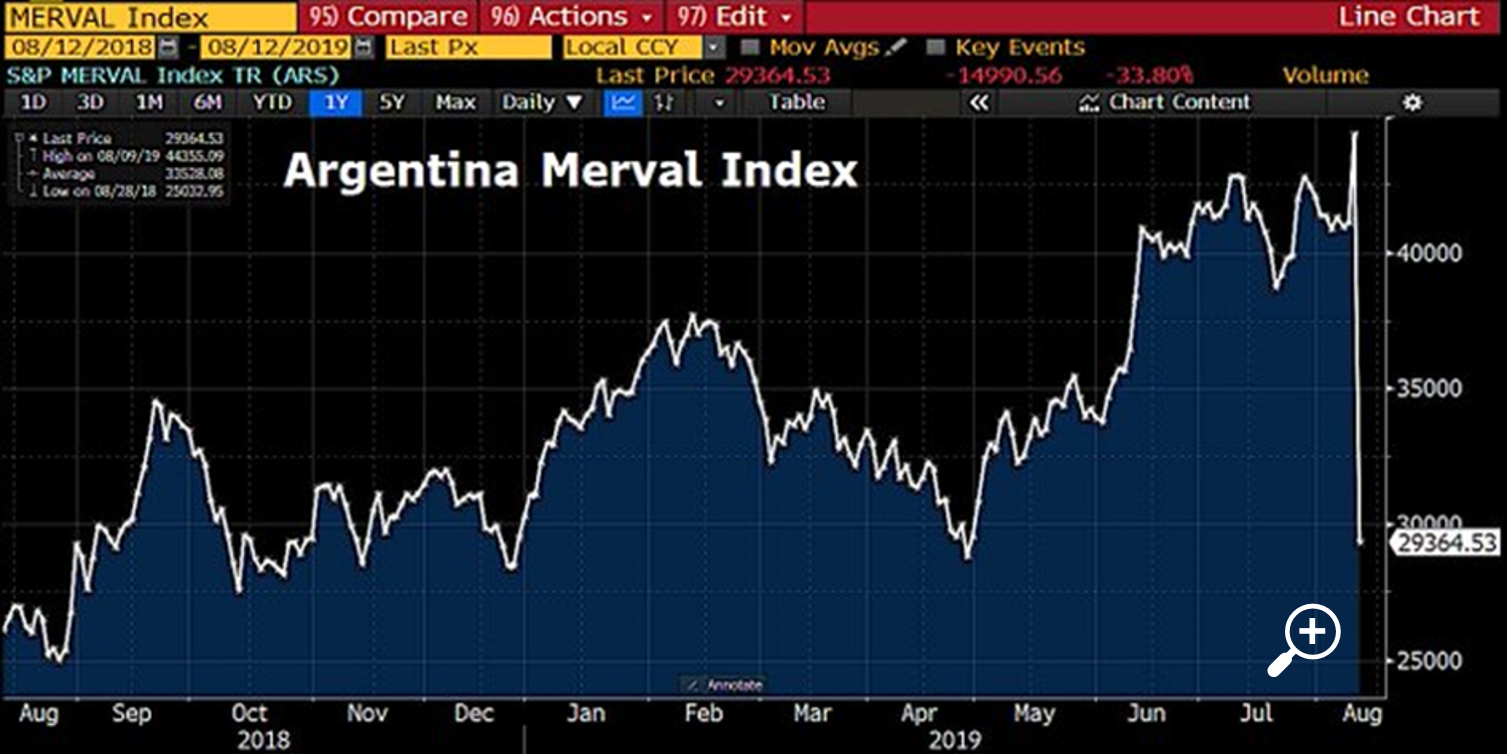 The new government that followed, under left-leaning Peronist president Alberto Fernández, and the measures to combat Covid-19 all contributed to the further exacerbation of the economy. Economists and experts say that the debt negotiations will determine the further course of the economy.

If the negotiations fail, Argentina will be facing a long period of contraction and international isolation. Creditors will go to court to enforce payment. The inflation rate (approximately 42%) will probably rise further, with considerable consequences for citizens; credit lines will be cut, with major consequences for the public and private sectors, and the Argentinian peso will continue to fall in value. This is an unattractive scenario for investors.

Should an arrangement be agreed, the low prices may provide an attractive entry point. The financial troubles are certainly not over yet, but this scenario does make gradual recovery of the economy and the markets possible.

Argentina has USD 335 billion in foreign debt, including USD 44 billion owed to the International Monetary Fund (IMF). Repayment of that portion is due in 2022 and 2023. The Argentinians have now asked for repayment to be spread out over a longer period. The IMF has already hinted that agreement on the USD 65 billion package will be favourable to that request.

In 12 months’ time, the MSCI Argentina Index lost nearly 50 percent of its value and has more or less flatlined since 22 May. 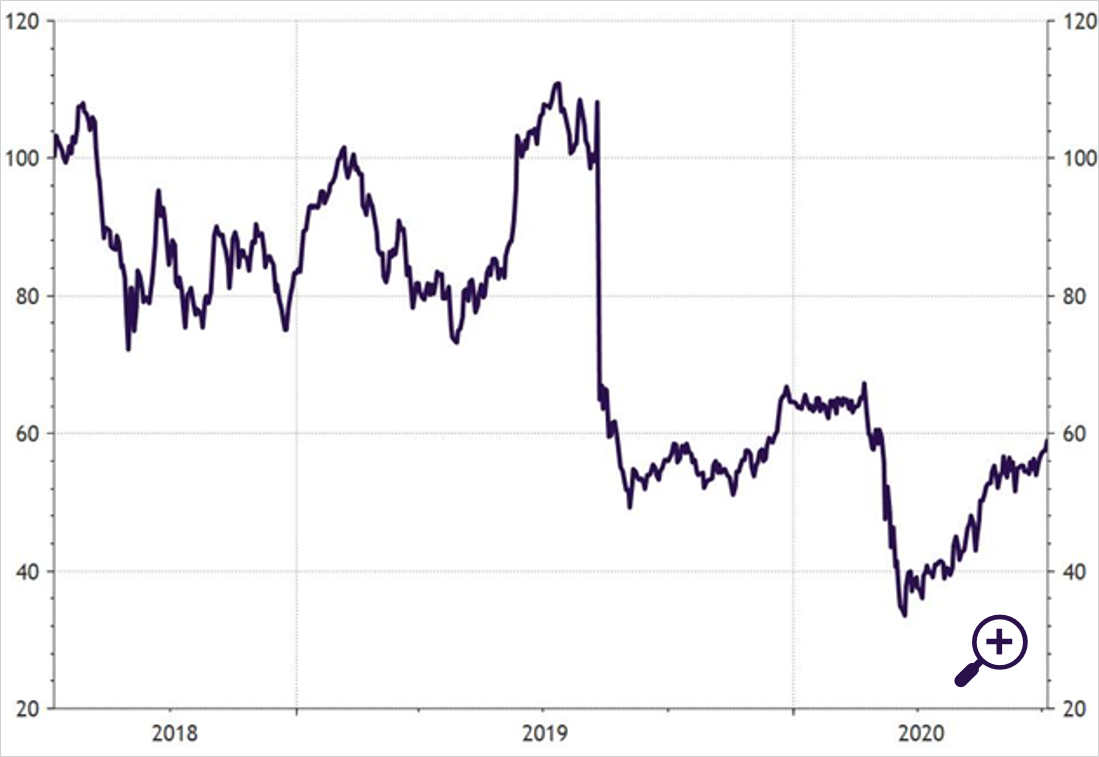 The MSCI Argentina Index – which many institutional investors use as a benchmark via the MSCI Emerging Markets parent index – has high volatility, with enormous peaks in most years. Returns are far more unpredictable than those in emerging markets as a whole. This is also in line with Argentina’s volatile economic growth figures.

The volatility of this index is not solely caused by Argentina’s erratic economy, but also by the fact that the index represents just five companies. These five companies account for approximately 85% (float adjusted) of the internal Argentinian stock market. The IT company Globant itself has a 60% weighting in the index. Two financial companies together account for 20%. The rest of the index is made up by YPF, an energy company, and Telecom Argentina.

This MSCI index does not do justice to the Argentinian economy, which is the third largest in Latin America (after Mexico and Brazil). The stock market is quite differentiated; the broad Argentinian share index Merval therefore paints a slightly more stable picture, although this index has also taken investors on rollercoaster rides on occasion.

Currently, high inflation and the recession in Argentina are unlikely to attract equity investors. The pressure on operating results is rising. According to Moody’s, Covid-19 has further aggravated the financial crisis. The food and telecom sectors have remained reasonably stable, but other sectors are under extreme pressure. Moody’s notes that this year, the real economy is expected to shrink by 8 percent and consumer prices will continue to rise by about 45 percent. This could cause liquidity problems for companies. This is a risk for creditors of outstanding debts of these companies, and for shareholders as well.

Moody’s also warns of the currency risk in this regard. No less than 96% of corporate foreign debt is unhedged. This means that, in Argentinian pesos, the debt increases as the Argentinian peso devalues further. Many companies had predicted the default in government bonds and prepared themselves by issuing local peso bonds. They believe that this will help them finance the liabilities to foreign bondholders. This means that the discount on Argentinian corporate bonds is much lower than the 60% discount to the NAV of government bonds. 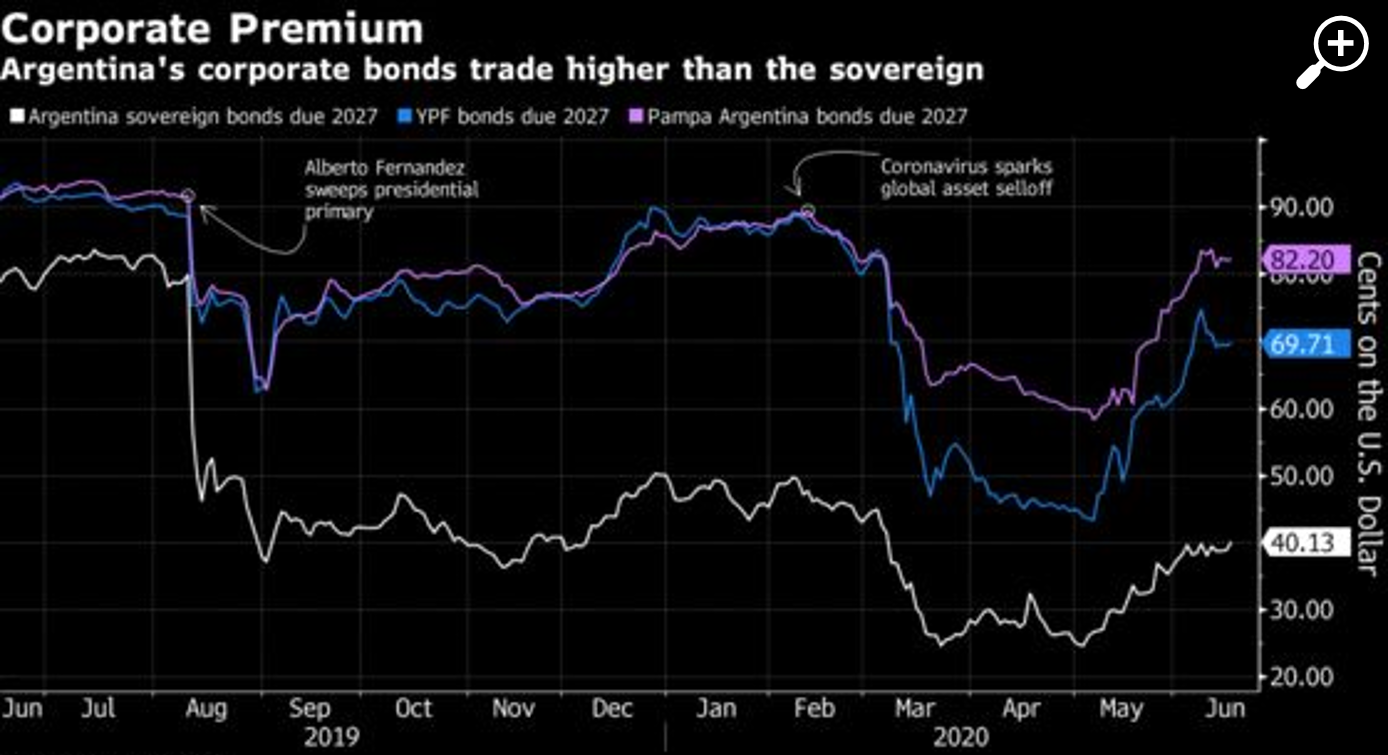 Economic growth is important for companies. A contraction is therefore a bad omen. This is not helped by the fact that unemployment rates are high, and the Argentinians have weak purchasing power.

The current government’s attempts to improve its citizens’ circumstances give hope to companies, but they will prove problematic for creditors in terms of government finances. An end to the impact of Covid-19 would provide a boost to both the economy and share prices.

Another important risk for equity investors is that Argentina could lose its place in the emerging markets index. The index compiler MSCI warned of this in late June, given that capital restrictions were reducing the accessibility of the Argentinian stock market to foreign investors.

Argentina was included in the MSCI Emerging Markets index just last year, which was a good sign for Argentinian share prices. Inclusion in this renowned index often means automatic inclusion on the buying lists of passive funds. However, this is a major buying signal for active investors as well. To be ejected from the index so quickly and reduced once again to frontier market status, for example, would be another setback for the Argentinian stock market.

INCLUDE IN PORTFOLIO OR NOT?

Many of these markets like Argentina offer a bigger growth potential than developed markets. Reforms, greater resilience in governments and companies, and improved economic ratios - such as inflation and exchange rate stability - make them interesting for investors.

However, the sovereign risk is something to consider in this respect, and Argentina’s position is undeniably weak in this regard. But shares have been punished to such a degree that an improvement in circumstances might lead to recovery.

The Argentinian stock market was re-admitted to the MSCI Emerging Markets in mid-2019. Its weighting is not substantial, however; at the end of October last year, Argentina accounted for 0.18% of the index, a decrease by a factor of 5 compared with 2001. In the JP Morgan Emerging Markets Bond Index Global Diversified, its weighting fell from 12% to just over 1% in the same period.

Strategically, the country occupies a modest position in an emerging markets portfolio. But the volatility in Argentinian markets offers scope to generate additional alpha. For investors who want to stay close to their benchmark, significant weighting for Argentina could cause a substantial deviation from the benchmark. Investors would have to consider whether the upward potential is worth such a tracking error. A temporary additional allocation would be the most logical option.

Argentina’s prospects remain uncertain. Successful debt restructuring would save the government a great deal of financial pain and it would give it greater leeway to provide financial support to both companies and citizens. The latter in particular have endured a great deal. In the end, foreign investors would benefit from a sound economy and citizens who have purchasing power. Seen in this light, the debt burden as it is now is simply unsustainable. A lot depends on the further course of Covid-19 in Argentina. Relaxing the lockdown could immediately lead to economic recovery in the short term.

In the longer term, the government will have to consider further reinforcement and opening up to companies and markets on an international scale, to attract foreign capital and to reverse the devaluation of the peso. As far as the debt burden is concerned, the next hurdle would have to be overcome in 2022, when the IMF demands repayment of its credit line. Once arrangements have been made for that as well, Argentina will be entering calmer financial and economic waters.

Investors in Argentina have to bear in mind that it is a volatile market. This offers opportunities to active investors to generate additional alpha. Investors need to remain alert, however: debt restructuring, political developments and the value of the Argentinian peso are crucial aspects in this regard. If progress is made in these areas, the financial markets will recover and both investors and the people of Argentina may finally be able dry their tears and to heave a sigh of relief.