Early this month 197 nations of the UN Framework Convention on Climate Change will meet for the 26th time during the Conference of Parties (COP) in Glasgow. COP26 is very important, as it is the first conference, where the first 5 year progress cycle on implementation of the Paris agreements (COP21) to limit the global warming to 1.5 degrees Celsius by 2100 and to Net Zero by 2050 will be evaluated and updated.

Unfortunately, the sum of submitted up till now individual country national plans (NDCs) yield an alarmingly greater than 2 degree warming, let alone the 1.5°C preferred scenario. In the meantime, climate changes is happening at much faster than the initially projected rate.

Therefore, COP26 is all about the ambitions, affirmation of intentions and acceleration of regulations. The level of success of the conference will be measured by the level of aggregate commitments sovereign nations and businesses make on the key topics: acceleration of transition to electric vehicles (EV), renewable energy, phasing out of coal, reducing deforestation and mobilization of finance.

COP26 will be a good test on whether countries, especially outside the EU, are ready to put aside their perceived short term national interests and power games committing to faster de-carbonization, sharing of technology along with an increase in financial support.

WHAT HAPPENS IF COP26 FAILS:

WHY COP26 IS SET TO SUCCEED? WHY THIS TIME IS DIFFERENT FROM COP21 OR EVEN COP25?

It seems like this time will be different from COP21 or even COP25, as there are more supportive rather than opposing factors: back up from most of the biggest emitting nations/regions, including China and the US; there is a huge shift in public opinion and shareholder sentiment, ever increased awareness and commitments from businesses, which, in our view, are the key to success.

What has improved on national level?

Both the biggest emitters and the biggest investors in clean energy, China (28% of global emissions) and the US (15% of global emissions) are now on board with the climate transition. China is planning to reach neutrality by 2060, and the US by 2050. Interestingly, both countries seem willing to engage in strategic competition for climate leadership. China’s support is crucially important for the energy transition, as it holds more than 90% of global rare earth metals and the main part of cobalt and lithium resources. Cumulative, 131 countries have committed to one or another type of Net Zero targets or has it in pipeline. However, not many formal action plans and legislations are in place. With a bit of luck, COP26 will increase the sense of urgency and stimulate the changes in national regulations.

What has changed on financial markets?

Assets under management in global ESG Equity funds (US$ billions) 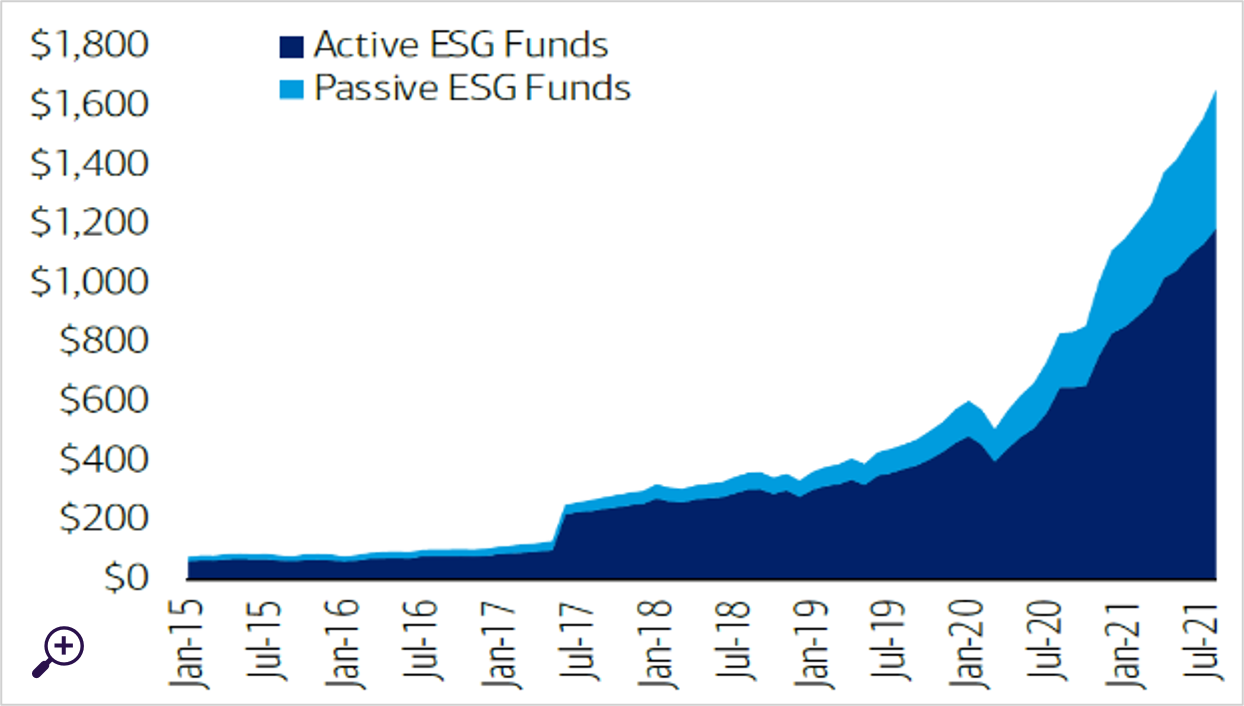 How has the business perception transformed?

COP26 is all about the ambitions and acceleration of regulations with the level of success being measured by the level of aggregate commitments sovereign nations and businesses make on the key topics like renewables, EVs, deforestation and mobilization of finance. We feel the changes that happened over the last 5 years, including support of China and the US, a huge shift in public opinion and investor sentiment, as well as an increased of awareness and commitments from businesses and the financial industry, increase the probability of success.

Key points from the investor perspective (asset owners in this case) in light of successful COP26 are:

If the COP fails, the impacts will be opposite to a large extent. High carbon intensive sectors will be safe for now, triggering a potential relief rally and profit taking for sectors related to climate solutions supply chain. The transition itself will however become more rapid and disruptive as the risk of stranded assets for high carbon intensive sectors will increase, with risks shifting to the future. ESG winners will see some profit taking due to a delay in supportive legislation and lower expected mid-term growth. Globally, it will not be a level playing field, as regions continuing with the energy transition (most likely the EU and the US) will tighten regulations for resident companies reducing their competitiveness or forcing them to re-locate. This, combined with the increased physical risks will tamper the GDP growth and increase economic instability, leading potentially to a social unrest.