ACTIAM strongly condemns the Russian invasion of Ukraine. Our thoughts are with all those affected by the violence. We fully support the tough sanctions policy pursued by NATO, the United States and the European Union, and hope that this will result in Russia ceasing its aggression and withdrawing from Ukraine. The sanctions policy hits the Russian economy hard (and also Russian civilians that don’t all support this war) and also has repercussions on the financial markets.

Based on our sustainable investment beliefs, we have excluded Russia and Belarus as countries for many years; we have no Russian or Belarusian government bonds in our portfolios. Both countries score poorly on all the aspects we assess governments on: they have international sanctions, citizens are not free, corruption is a major problem, and they perform poorly on all aspects of good governance. We have also excluded all Russian state-owned companies or companies in which the state has a significant interest for years. Gazprom, for example, has been excluded since 2015 and Rosneft since 2017. Both because of human rights violations and large-scale environmental controversies.

We have also been excluding a large proportion of Russian companies for years. Of the 25 Russian companies included in the MSCI Emerging Markets Index, we already excluded 15 before the invasion. Many of these companies do not meet our Fundamental Investment Principles. For example, they are involved in human rights violations, produce controversial weapons or are on international sanctions lists. Examples are Bank VTB, Transneft and Sberbank. We exclude others because they cause major sustainability risks. The management is often too closely linked to the Russian government or the companies (often steel, aluminum and energy conglomerates) have no climate and environmental policy.

After the invasion, we re-examined the remaining 10 positions for involvement with the Russian government and/or the invasion itself. Our analysis shows that these companies are not directly involved in the invasion or supplying equipment for it. Moreover, none of them is on the sanctions list. They are active in sectors such as IT, food retail, chemicals, commodities and finance. A number of internet and social media companies made a potentially positive contribution to the spread of independent news in the period before the invasion. Unfortunately, the tightening of Russian media laws has made this even more impossible.

Nevertheless, we decide to sell these shares as soon as possible. ACTIAM currently has an allocation to Russian equities of less than 0.04% of its total AuM. These companies are in the passive sustainable equity strategy that follows the MSCI Emerging Markets index. MSCI has announced to remove the companies from the relevant MSCI Emerging Markets benchmark. The sale may take some time; current market conditions are complex. The uncertainty surrounding Russia-Ukraine is high and may lead to additional volatility.

We also do not hold positions in Russia in our financial inclusion private debt portfolios. The financial risk is too high and the accessibility of the financial inclusion sector too low. We do monitor the risk of securities to the region around Ukraine. Through FX movements and trading with Russia, financial institutions in this region are potentially at risk. As the loans in which we invest are short-term and the financial institutions have sufficient cash available, these risks are limited in our view. We monitor developments daily and are in contact with the institutions we invest in. In addition, we are in talks with other microfinance investment vehicles to examine together how we can support the sector in these exceptional times to avoid, for example, liquidity stress.

Until last Friday, there was no question of panic. After a missile attack caused a fire in Europe's largest nuclear power station and NATO met in an emergency session, investors did become nervous. The standard safe havens were sought. Government bonds of Europe and the United States (US) were in demand; this is clearly reflected in the dark line in the graph. The losses of the past two years have almost been wiped out. Gold, as a traditional safe haven, also rose in price. You may notice from the graph that the prices of the MSCI World share index did not fall that much. This is mainly because the US dollar has strengthened so much. 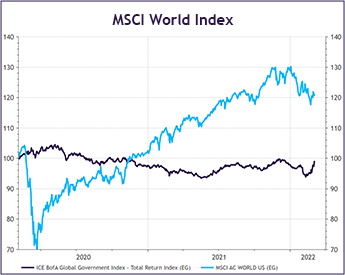 In recent months there has been some recovery in European equities versus the US. The war has brought this to an abrupt end. Europe will be much more directly affected by the economic consequences of this war; there are more direct economic relations, such as grain, oil and gas. In addition, this war will affect consumer sentiment more. 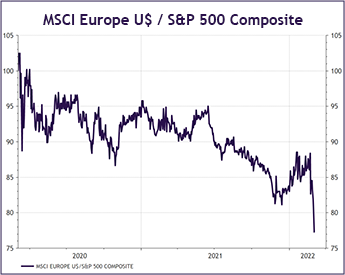 The first inflationary wave in 2021 was mainly caused by disruptions in the production chain. This was followed by the rise in energy prices. The basic effects of this would subside from the first quarter of 2022. The war has caused energy prices to rise again. This will give a strong inflationary impulse, especially in the coming months. In the medium term, there will be a dampening effect from reduced economic activity. Ukraine and Russia together account for 1.8% of the total world economy. The reticence of Western consumers as a result of the war will also dampen economic activity. As a result, demand inflation will also be a factor in the end. The graph shows the annual increase in oil prices and inflation in the eurozone. 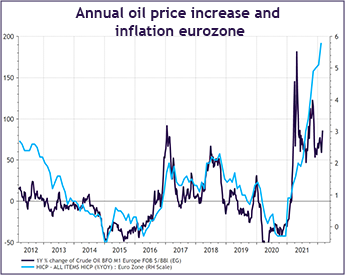 The US dollar has rapidly gained value, from 1.14 to 1.09 . This is because Europe is much more affected than the US. Moreover, the Fed clearly indicated that it would continue to raise rates in March, despite the war. As a result, bond yield spreads have widened further, making the US dollar more attractive. There is a Pavlovian reaction of investors in times of crisis, buying US dollars. 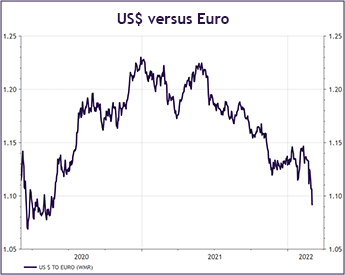 The Moscow Stock Exchange is closed. As a result, there are no longer any current stock market prices available for the interests in Russian shares. Nor can these shares be sold. For the valuation of the relevant Russian shares, we use derived valuations of comparable investments or indicative prices obtained from third parties who maintain a market in the relevant investments, or the valuation is determined on a model basis. Due to the limited position in Russian shares, the impact of the aforementioned adjustment of the valuation methodology on the net asset value of the fund investing in these shares is expected to be limited.

We continue to monitor the situation; we assess whether companies are involved in supplying arms or equipment to the Russian government or are engaged in activities that support this war. If necessary, we will immediately exclude these companies. ACTIAM will also closely monitor the current situation and the valuation basis and make adjustments if necessary.

ACTIAM and Cardano are aware of what is happening in society. This is why we support the national campaign by the collaborating aid organisations. We have already transferred €12,000 and many of our staff have made personal donations as well. Will you join us? 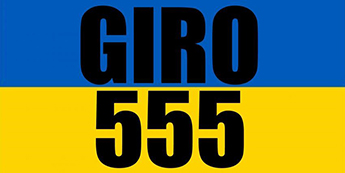